Presented by SIFAS PRODUCTIONS, In collaboration with Esplanade – Theatres on the Bay
(Singapore and India) 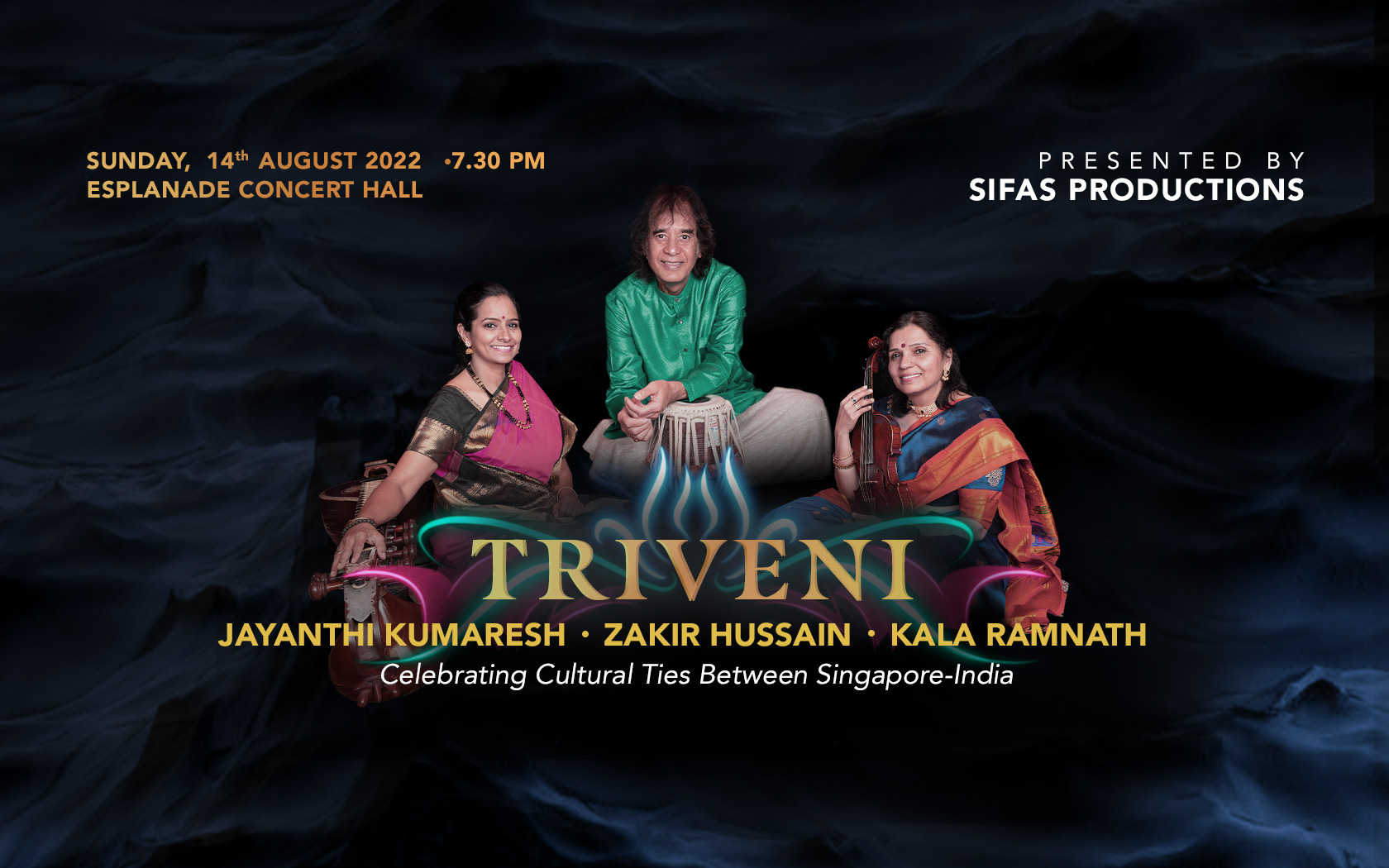 Zakir Hussain, Kala Ramnath, and Jayanthi Kumaresh come together for the first time as a trio for the 2022 TRIVENI tour. As leading Indian classical exponents of their respective instruments—tabla, violin and Saraswati veena—each member of the trio is also renowned as virtuoso collaborators, pathbreakers and educators, advancing the art of their instruments to remarkable levels, in the context of their classical traditions and beyond. Feted and honored in India and abroad with numerous awards, each has successfully toured all over the world with their own acclaimed solo projects.

Triveni is the mythical site of the union of three sacred rivers in India, and the name aptly represents the confluence of the varied musicalities the three maestros bring to this collaboration. A hallmark of Zakir Hussain’s iconic career has been his groundbreaking work at the forefront of brilliant musical dialogues between Hindustani (North Indian) and Carnatic (South Indian) music. With Kala Ramnath, an innovative representative of North Indian raga tradition, and Jayanthi Kumaresh, the leading exponent of the ancient South Indian veena, Zakir Hussain seamlessly stitches North and South Indian rhythm traditions to provide a bridge for veena and violin to meet. TRIVENI promises to be a fluent, joyous, and entirely original musical conversation, a sonic experience of the highest order.

Advisory:
Mask-wearing is required for all indoor events.
Admission Age:
6 and above.
Things to Note:
With the growing threat of online phishing scams, please remain vigilant. Use official ticketing channels such as Esplanade.com or Sistic.com.sg and check that you are on legitimate websites before logging in to book tickets.
Accessibility: We provide services and facilities for patrons with access needs. Concessions for persons with disabilities (PWDs) are available for selected shows. Read our accessibility guide.
Ticketing: Prices exclude ticketing agent’s booking fees. Entry to performance venues is granted to patrons with tickets that have been purchased through authorised ticket agents only. Read about ticketing or check our FAQs.
For information about late seating, photography and more, please read our general advisory.
Artist Information

The pre-eminent classical tabla virtuoso of our time, Zakir Hussain is appreciated as one of the world’s most esteemed and influential musicians, one whose mastery of his percussion instrument has taken it to a new level transcending cultures and national borders. Along with his legendary father and teacher, Ustad Allarakha, he has elevated the status of the tabla both in India and around the world.

He is the recipient of countless awards, including two Grammys, Padma Bhushan, Padma Shri, and Officier in France’s Order of Arts and Letters. Voted “Best Percussionist” by both the Downbeat Critics’ Poll and Modern Drummer’s Reader’s Poll over several years, Zakir was honored with SFJazz’s Lifetime Achievement Award at their 2017 Gala for his “unparalleled contribution to the world of music.”

As a composer, he has scored music for numerous feature films, and has composed three concertos, the most recent enjoying the distinction as first-ever for tabla and orchestra. Zakir is also the recipient of the 1999 National Heritage Fellowship, the United States' highest honor for a master of traditional arts.

Maestro Kala Ramnath with her “Singing Violin” stands among the world’s finest, most inspirational instrumentalists. Her playing has been featured on the Grammy nominated Miles from India project, and her compositions have appeared in the Grammy-winning album 27 Pieces and the Kronos Quartet’s 50 for the Future. The UK based Songlines magazine called Kala Ramnath one of the world’s fifty best instrumentalists and selected her album Kala as one of its fifty best recordings. She was the first Indian violinist ever to be featured in the violinists’ “Bible,” The Strad. She was the subject of a solo essay in the third edition to The Encyclopedia – Rough Guide to World Music. Her contributions feature in Hollywood soundtracks like the Oscar nominated Blood Diamond, and many more.

Most significantly in an Indian context, in May 2017 she was awarded the most illustrious Sangeet Natak Academy Puraskar for her contributions to the violin in Hindustani Classical Music.

Kala is at the vanguard of the present generation of Indian instrumental superstars. Due to her rigorous training in the Hindustani classical tradition and familiarity with the Karnatic classic tradition, she comfortably forges musical alliances with artists of renown from different genres around the globe, incorporating elements of Western classical. Jazz. Flamenco and traditional African music into her rich and varied repertoire.

With her mesmerizing glides, the timing and purity of her notes, and her soulful playing, Dr. Jayanthi Kumaresh has been captivating audiences around the world for thirty years now and is one of the leading Veena (roughly, the Indian lute) artistes today. A sixth-generation musician, she began playing the Veena at the age of three and is one of the youngest Veena artists ever to receive the A-TOP GRADING, the highest from All-India Radio.

She has received many awards in India, including the Sangeetha Choodamani, the Kalaimamani from the Government of Tamil Nadu, the Veena Naada Mani, the Kala Ratna, the Sathyashree, and the Gaana Varidhi, to name a few. She is a seven-time recipient of The Music Academy, Chennai’s Award for Veena.

A collaborator, she has performed with legends such as tabla Ustad Zakir Hussain, Violin Maestro Shri. R. Kumaresh, Flautist Ronu Mujamdar, and the like. A pioneer, she founded the Indian National Orchestra, where 21 musicians playing different Indian instruments came together under one banner to showcase Indian classical music. A researcher, she holds a Doctorate for her works on “styles and playing techniques of the Saraswati Veena,” and conducts workshops and lecture demonstrations around the world. A composer, she has scored music for several dance productions and musicals. Her music for the dance ballet Krishna Bhakthi for Rasika, Portland, featured both the Carnatic and Hindustani styles of composition. She also composed and released the album Mysterious Duality, which is a multi-dimensional reflection of the simple yet complex self through a single instrument, the Veena, overlaying layers of several Veena recordings to create a symphonic composition.