Which mythical Mid-Autumn character are you?

The moon has long been the source of much lore, and its associations with beauty, femininity and madness—”lunar”, “lunacy”, even “loony”, from the Latin word “luna”, which means moon—have only added to its allure.

Wedged in our collective imagination, the extraterrestrial entity has inspired art and informed culture for longer than we can remember.

The ancient Greeks had the goddess Artemis, Apollo’s twin sister, who was to them, the personification of the moon. Forever young, she was the goddess of the woodland, accompanied by her Amazon warriors. In Maori culture, Rona, the daughter of the sea god Tangaroa who also controlled the tides, made some angry remarks at the moon when it slid behind some clouds, causing her to hurt her foot in the forest. The moon heard this and snatched Rona and her water bucket from the forest. This Maori story symbolises the phases of the moon and its effect on the tides on Earth.

Then there are the superstitions, which are relatively more vicious. Humans transform into snarling werewolves under the full moon. Celtic lore believes that sleeping in the light of the full moon will destroy your face. From ancient Jewish and Christian prophecies, a blood (red) moon means that the end is near or that war is close at hand. The Chinese superstition claims that pointing at the moon brings bad luck because it’s disrespectful to point at the Moon Goddess, Chang E – she’ll cut off your ear.

The myth of Chang E is closely linked to the Mid-Autumn Festival, which is said to have originated in the Song Dynasty from a tradition of worshipping the full moon. For most Chinese today, the Mid-Autumn is a time for reunion and family, and for some, paying respects to the Moon Goddess. But the Mid-Autumn and its accompanying veneration of the moon is also celebrated all over Asia, under different names: Children’s Festival (Vietnam), Tsukimi (Japan), Chuseok (Korea) and Bon Om Touk (Cambodia). Practices differ in the region – Vietnamese children carry lanterns under the moonlight, the Japanese view the moon at picnics, Koreans travel to their hometowns to be with their families and Cambodians hold massive dragon boating events. Singaporeans, naturally, gravitate to the food aspect of the festival, the mooncake.

Take 5, with a quiz to see which mythical Mid-Autumn character you are.

Legend has it that there were once 10 suns. The archer and member of the Imperial Guard Hou Yi shot down nine suns, leaving the one we see today. Here come two versions of what happens after this heroic act.

The more commonly cited version goes like this: The Queen Mother rewarded Hou Yi with an elixir of immortality, which he places under the care of his beautiful wife, Chang E. On the day of the full moon, Hou Yi went hunting and his scheming disciple Feng Meng took the opportunity to force Chang E to give him the elixir. She swallowed the elixir in desperation, flew to the moon and was separated from Hou Yi forever. She became the Moon Goddess. The devastated Hou Yi was sent to the sun by the Queen Mother, who gave him a cake that when eaten, allowed him to withstand the heat. With a special talisman, Hou Yi could visit Chang E during the full moon, once a month. It is unclear whether Feng Meng was killed by Hou Yi.

In the darker tale, Hou Yi is elected king by his people for saving them from the ferocious heat. However, he became selfish and tyrannical. He asked for an elixir of immortality from the Queen Mother in order to live forever. His wife Chang E didn’t want him hurting more people so she stole it on the night of the full moon and fled to the moon. Hou Yi shot at his wife but missed. And he died in anger not long after.

Rumour has it that a rabbit accompanies Chang E on the moon.

Oh yes, the rabbit has its own story. Myth has it that Buddha disguised himself as a hungry old man and approached three animals for help: a fox, a monkey and a rabbit. The wily fox presented the old man with a fish, while the quick-footed monkey offered him some fruits. The rabbit (market spoiler) bravely leapt into the fire, sacrificing itself as meat for the pitiful old man. Touched by the rabbit’s selflessness, Buddha resurrected the rabbit, granted it immortality and sent it to the moon in veneration, to watch over Earth.

Catch a storytelling session titled Moon, in which actors Sharon Sum and Sugie Phua go on an adventure-filled journey to the “Moon” to save humanity, premiering on 2 Oct, Fri, 5pm.

Bonus: The woodcutter, the tree and the moon

This Vietnamese story is about a woodcutter named Chú Cuội. Poor and hungry, he chances upon a tiger cub in the woods. He captures the cub but accidentally kills it when scrambling away from the tigress returning from her hunt. He leaves the cub for its mother to find. The tigress roars in despair but feeds the cub some leaves from a banyan tree and the cub miraculously comes back to life.

Cuội (still en scene) uproots the tree and lugs it home, with every intention of milking it for its supernatural properties. He became a famous healer in his village and beyond, and his riches grew. He eventually married the daughter of a nobleman, and she was apparently deeply unhappy with the marriage.

Cuội often travelled for his work and he reminded his wife to always treat the banyan tree with respect. One day, either by folly or with every rude intention, she decided to piss on her husband’s precious tree. Cuội got home just in time to see the tree uproot itself and rise above the ground. In desperation, he flung himself onto the roots of the tree and clung on as he was carried up, up and away, to the moon. 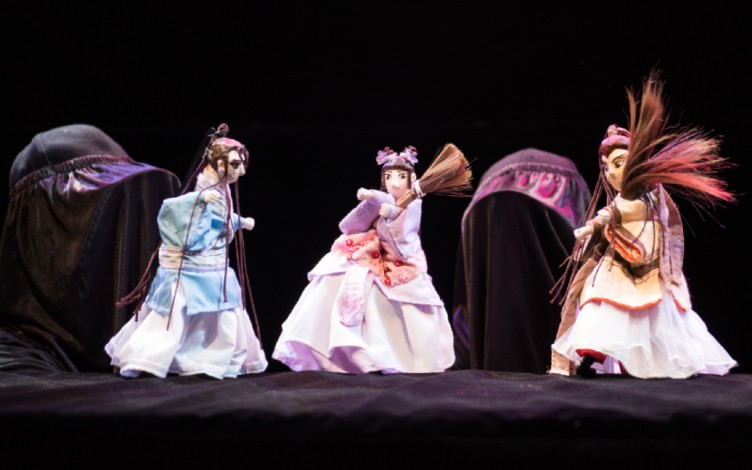