On telling poignant stories through photography

Bob Lee is passionate about telling stories through the mediums of photography and videography. With more than a decade of experience in photojournalism and corporate photography, Lee has also spearheaded several projects that bring various social issues to light. In this interview, he reflects on what sparked his interest in using his craft to raise awareness on such issues, in particular the conversation surrounding autism in Singapore through his project, Finding What’s Next. You have always been active in bringing awareness to social issues. What sparked this interest and passion?

It all started with my days working as a photojournalist with Lianhe Zaobao. After I got a better grasp of my role there, things became more predictable and repetitive. There are certain events that would always be covered in the news, such as the start of the school year or National Day celebrations.

After a few years, I began looking for personal assignments. Following the September 11 attacks in 2011, there were a number of events in Singapore that sought to foster greater racial harmony. One such event involving the Inter-Religious Organisation gave me the opportunity to meet people of different faiths that I was not as familiar with. My project Have a Little Faith was prompted by my newfound interest in discovering more about the cultural practices of the Jewish and Sikh communities in Singapore. From then on, I began working on a personal project every year. When I started visiting one-room apartments of flats in Singapore, it struck me that I could use my photography skills as a way to raise awareness of the living conditions of the elderly in these apartment units. During an exhibition of my project One Room Flat, someone said that by publishing a book on the project, it could reach more people beyond the exhibition. This led me to publish books on these two projects.

In my younger days, I harboured ideals of using photography to change the world or to raise awareness. I have come to believe that you do not need to do big things to effect change. For me, it is enough if photography is able to help one person to fulfil their dreams.

You once said that photography is a means through which issues can be brought to light or even to make someone’s dreams come true. Could you share more on your thoughts on this?

It was through the One Room Flat publication that some social workers got to know of my practice. They approached me to take the last family portrait photographs of patients in hospices. This is something that I still do up until today. Most of them have simple wishes like having one last portrait photo with their families. I am sure that when their family members look at these photographs a decade later, they would be thankful that these memories were recorded.

You cut your teeth as a photojournalist. Now you are running your own photography business, The Fat Farmer. How did your work in the newsroom and corporate photography impact your photography practice?

I have discovered that a key feature that runs through my photography practice, whether it is for commercial or personal projects, is establishing a connection with the people I am photographing. My first decade of experience as a photojournalist and the subsequent decade in corporate photography made me realise that communication is crucial. It is important to have a heart-to-heart connection with my subjects. When I was a photojournalist, I was meeting different people every day. It taught me how to effectively communicate with people. When shooting for Memory Blocks, I needed to build rapport with my subjects. It was not just about entering homes to take photographs. The photographer needs to find a way to get a subject to genuinely smile and not just put on a ‘default smile’. Learning how to strike a casual conversation with subjects before shoots and setting them at ease is a skill I have honed over the years. What got you interested in surfacing issues related to the needs of autistic people?

My son Jun Le has autism. Initially, I wanted to do a project on autism to mark the milestone of him turning 12 years old. My wife shared that it is more important to bring people’s attention to the ‘post-18-year-old cliff’ where caregivers of autistic children realise that they have to start thinking of what happens to their children after they leave the special education school system. Parents and caregivers are usually so preoccupied with daily needs that they do not think about what will happen in three to four years’ time.

Finding What’s Next was sparked off by my wife's and my personal journey in discovering what would come next once our son turns 18. I believe the creator must be invested in every project in order to sustain interest throughout the entire course of working on it.

How did the idea for "Finding What’s Next" come about?

I had not done a project on autism apart from taking photos of my son and conducting photography workshops for autistic children. I felt that I was not there yet because I believed it was important for Jun Le to turn 12 years old first for me to have adequate experience and be able to share more with viewers on what it is like to parent an autistic child. The ‘post-18’ cliff is an important topic. While working on this project, I visited a home that takes care of autistic adults. The information is out there, it is only whether we have a reason to seek out this information. I know what autism is but because Jun Le has not turned 18 yet, I have not thought about issues relating to the ‘post-18’ cliff. Through this project, I learned more about day activity centres and different homes in Singapore.

We know there is a spectrum for autism, but our understanding of this spectrum is often an abstract one. Even for those in the autism community, you would be familiar with the part of the spectrum that matters to you and may not be as aware of other parts. Through this project I discovered more about other parts of it. What is an issue to me may not be a problem to someone else, and vice versa. When we started on this project, I was certain I wanted to feature autistic adults on different parts of the spectrum.

Image of Marcus and his father. Image courtesy of the artist.

Image of Ashraf. Image courtesy of the artist.

How did you choose to tell the stories of the individuals featured in "Finding What’s Next"?

My initial idea was to have half of the featured stories to be about individuals who are employed and the other half of those who are unemployed. Upon further discussion, we realised we should not differentiate the individuals by their employment status. For those who are employed, it could be because their parents took the initiative to create these opportunities for them. We should not use their employment status to gauge their abilities. Hence, we dropped this idea.

As the project progressed, I noticed there is a topic to focus on for each of the subjects. For example, I thought the key focus for Marcus’ story was his love for exercising. Over time, it became apparent that it was his close relationship with his father that was unique and the crux of the story. When I shot Ashraf, I slowly moved beyond documenting his work at the café to capturing how important religion is to him. For each of the profiles, we zeroed in on what each individual sought for, and that became the key focus of their stories.

Do you feel that your perspective has changed after working on this project?

My perspective did not change but it became more in-depth. I discovered how little I knew. If we use education as an analogy, as a parent of a teenager with special needs I feel that I am only at the primary school level. When he turns 18, there will be other issues that I will have to deal with. I would need to plan for what would happen to my son when me and my wife pass on. This project features individuals aged 19 to 30 years old. There are still many things that parents with autistic children, including myself, would need to learn and prepare for, like deputyship, special needs trust funds, amongst others.

What are you hoping to do through this project?

There are three audiences I had in mind. The first is people like myself, because I wanted to find the answer to what I, as a parent to an autistic young adult, need to prepare for. The second would be parents with autistic children, whose children are close to my son in age, or even younger. I hope that when they see this exhibition, they would reflect on the need to plan ahead. For those whose children are older, I hope they would see that there are other parents who are going through similar experiences, so they need not feel so alone. The last group would be the general public who may not know much about autism. Hopefully, this exhibition can give them more insight.

However, the project goes beyond creating awareness. It is about what all of us can do to become a community that looks out for and helps families of autistic people. For example, we could help to keep the lift door open for a parent and his or her child. Community support networks are important, and we hope that these networks will emerge from this. It always starts from the small things.

Check out Finding What’s Next by Lee at the Esplanade Tunnel from 16 Apr to 4 Jul 2021.

Learn more about the artist, the exhibition, and autism advocacy 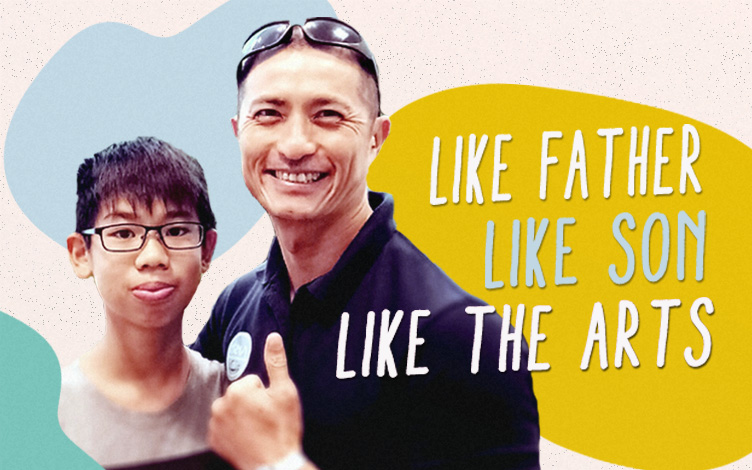