I remember my first vinyl record. It was a pressing of The Strokes’ sophomore studio album, Room on Fire (2003), that I coincidentally stumbled upon at a record store. Being a huge fan of the Manhattan quintet, getting the record was a no-brainer. Buzzing with excitement, I sat by my turntable, ready to rip off the shrink wrap when I stopped to admire the front cover. The album art was inspired by Peter Phillips’ 1961 piece titled War/Game.

An artwork depicting the two forces that pitted against each other during the American Civil War, the history packed into the cover was truly astounding.

It dawned on me that there’s more to vinyl records than just the auditory consumption of music. The dissection of the album art, or the ritual of pulling the record out from its sleeve and then placing the needle onto it, are traditional experiences that have been forgotten in this digital age.

Unlike in USA or Japan, our sunny island isn’t recognised for its vinyl culture. Still, there is a community represented by different generations of vinyl aficionados, passionately keeping the flames of this tradition alive in their own unique way, while bolstering the local music scene.

Having been around since 1962, Roxy Records has seen it all. From the golden age of the album, to the rise of digital and back to its recent resurgence, the record store run by siblings Paul, Sia and Richard has seen vinyl record lovers of all ages walk through their doors.

And their longevity is no coincidence. As you enter the store located at the evergreen Excelsior Shopping Centre, you’ll be amazed by the variety of titles they carry.

From legends like The Beatles to modern favourites like The 1975, they have catered to the palates of audiophiles from different generations.

Incidentally, the store is still located along Hill Street, at almost the same spot where their father first opened the original store in a shophouse in 1962. If you needed another indicator of Roxy Records’ legacy, it is worth noting that they used to own the copyrights to the original movies of a Teochew Opera troupe from Hong Kong in the form of LPs and cassettes in the 1960s, back when the store was run by their father and his partners.

“We would buy the masters from Hong Kong and press the records in Japan, before distributing it regionally to countries like Malaysia and Thailand,” shared Paul as he reminisced about the heydays.

Still, their endless crates of records are not limited to international and regional titles. Sharing with me some seven-inch pressings of local bands like Opposition Party and The Bois, Paul highlighted the importance of promoting our own local music.

In the past, I’ve had visitors from other countries looking for titles from local bands and artists. As a record store, we have to promote local music to represent the talent that we have.

As Paul notes, brick-and-mortar stores like Roxy Records transcend being a nucleus for music lovers to converge and manifest their love for music, as they also have the capacity to put our local talents in the spotlight.

Another example of this is Mosta Records. Founded by Azri Ali and his wife Afidah A. Manaf in 2016, the record store located along Arab Street doubles as a record label and event space. The stylish locale has hosted a variety of eclectic in-store performances by local acts during events like the annual Record Store Day, where crowds would often spill out of their compact store previously located at Peninsula Shopping Centre.

This is something they will have to put off for the time being because of restrictions due to the COVID-19 pandemic though.

“It was loud, it was great, it was brilliant!” he shared, recalling the in-store festivities during last year’s Record Store Day.

“You often see crowds like that at record stores in the United States where the culture is vibrant, so it’s nice to bring a similar atmosphere to the scene here.”

As a record label, they recently released Peribadimu, a single by local artist Huda, on vinyl. The single was mastered by Bill Skibbe of Third Man Mastering, a mastering studio by Detroit-based Third Man Records which was founded by Jack White (Mosta Records is the authorised dealer and distributor in Asia for Third Man Records).

The single was received well by both her core fanbase and new fans alike, selling out all 100 copies within two months since its release on 4 July.

“I want to bring back the culture of the 1950s where artists would first release singles on the 7-inch before going for a full album on the 12-inch,” Azri shared.

When asked about what the record release meant to him, the affable 47-year-old highlighted the collective desire of local music lovers to have a more tangible music experience.

“It just goes to show that people miss the spirit of collecting. When you bring home something physical like vinyl records, the soul of the artists’ work is embedded with it.”

One way or another, this passion has rubbed off onto a newer generation who are not only preserving the culture, but are also creating their own platforms to introduce it to a fresher crowd.

Novacane Records was launched late last year by a pair of vinyl aficionados in their 20s, Hoirul Haffiz and Ina Bonilla. Their motivation is simple—to bring back the crate digging culture. The serendipity of finding a title you love or being awestrucked by a cover art that caught your eye as you sift through piles of records is an essential experience for any vinyl junkie. Ina (left) and Haffiz (right) have been collecting vinyl records for six and eight years respectively. Photo by Novacane Records.

Prior to the COVID-19 pandemic, you could have caught the amiable duo mending their booth at an event or a gig, usually swarmed with people nose-deep in their crates, hoping to find something that calls out to them.

There is a certain charm about a vinyl record booth that will certainly draw you in, even if you are not too familiar with the format.

“We’ve had people who aren't really into vinyl records but get excited when they see an album that they recognise,” shared Ina.

“It could be an album of their favourite band or maybe a title that their grandmother used to own; it evokes a sense of joy that we are glad to bring to the local music community,” she added.

Apart from the exposure of vinyl culture to a newer demographic, Haffiz also cited the indispensability of such booths in the music scene.

Local music and vinyl records go hand-in-hand because when you go to a gig or a festival, you’d want to see a merch stand there, right? It just creates the full experience, bolstering the local music community.

When asked about their personal collections, Haffiz talked about a pressing of U2’s 1980 studio album Boy, which he got for a bargain at a flea market. What he found inside were decrepit cutouts of newspaper articles and a letter to a radio station by a guy named Chris that goes back to the 1980s.

Just goes to show that vinyl records are a form of time capsules, serving as a container for memories, and expression of emotions—a sentiment echoed by Muhammad Syazani, the 26-year-old behind online record store Leftyrecords.

“The records that you collect can hold a lot of meaning and represent certain periods of your life,” he shared. “It’s this personal connection with the art that sorts of create an intimacy between you and the artist that no one can come in between, something you don’t get with digital.” Assisted by his fiancée Aliya, Syazani wants to provide accessibility to the newer generation to explore the vinyl culture. Photo by Leftyrecords.

For Syazani, his interest in vinyl records was piqued during a school overseas immersion trip to the UK in 2018 where he stumbled upon a rare first pressing of The Beatles’ Sgt. Pepper’s Lonely Hearts Club Band at a record store, albeit one that was not in the best condition.

This discovery led him to getting another record, and then another, eventually snowballing into a full-blown hobby. Wanting to share his passion, he started Leftyrecords to provide the accessibility for those new to this hobby.

“Maybe they’re not sure on where to start or are too shy to go to the physical record stores. In a way, Leftyrecords is that platform for them to start their journey,” he shared

Having launched the Leftyrecords website in October, Syazani expressed his desire to expand his reach beyond the virtual realm.

“In the future, I hope to be able to open my own record store, perhaps somewhere in the central region to continue providing that accessibility.” he shared.

“I really do hope that record stores in Singapore will grow to become more ubiquitous, as it’s a culture worth preserving for generations to come.”

These lofty ambitions harboured by Syazani, coupled with the efforts of those in the local vinyl community to preserve this culture, shows that this medium still has a place in the hearts of the people.

They remind us of the forgotten beauty that comes with the tangible ownership of the music we love—something I finally understood watching the pin lowered onto my Room on Fire vinyl as it plays out the splintering opening riffs of What Ever Happened?.

Certainly, the magic of this medium will never wane because as long as music stays alive, vinyl stays alive. 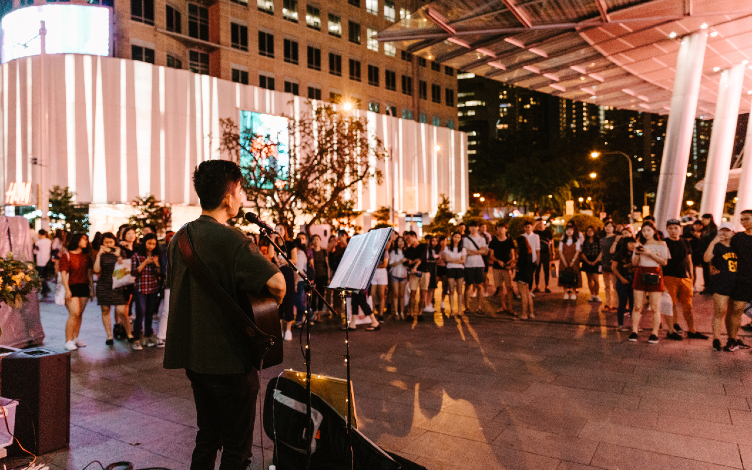