The gripping story of Sisters’ Island, part of Singapore

Kids, do you always fight with your brother or sister? Here’s a tale, close to home, of two sisters who were the opposite!

A long time ago, there was a widow whose husband had passed away, leaving her with two daughters, Linah and Minah.

While they worked very hard every day to make ends meet, they were happy, especially the sisters. They were joined at the hip! Wherever Linah went, Minah was there and wherever Minah went, Linah was not far behind. But as her daughters grew up, the woman told them that they had to get married. But Linah and Minah did not want to be separated and thought of an idea to derail their mother’s plan. They agreed to get married on the condition that their suitors were brothers, knowing that it was almost impossible to fulfil the condition. Their mother agreed.

Time passed and many men came to ask for their hand in marriage, but none of them were brothers. However, bad luck befell the sisters when their mother passed away. They had no choice but to live with their uncle in another village if they did not want to be separated. The sisters lived peacefully with their uncle. Every day, they would busy themselves with chores to help their uncle.

On one such day, Linah headed out to the village well to draw water.

Coincidentally,  a group of sea pirates had come onto shore and was near the well where Linah was drawing water. The chief pirate saw Linah and was instantly captivated by her. He wanted to make her his wife. He approached her.

Linah saw the big burly man with his band of pirates and was frightened out of her wits. She grabbed her pail and ran back to her uncle’s house. But her enamoured suitor was not deterred. Along with his men, he trailed after her. He was determined to marry her, even if that meant that he had to take her by force. He stepped forward and knocked on the door. Linah and Minah's uncle opened the door. He had no clue it was the leader of the pirates who was standing at his doorstep.

Upon seeing the old man at the door and the frightened girl peeking from behind him, the chief of the pirates boasted, “Old man, that girl over there! I am here to marry her. I am the leader of these men and will give you anything you want so that she can be my wife. Treasures, gold, jewellery, money? Just name it and you shall have it. She will never starve and will be gifted with whatever her heart desires. Consider your family lucky that I have come here to marry your daughter!”

Linah trembled at the sight of the pirate and clutched her sister’s arm tightly. “Uncle, please don’t give me away. I do not want to be married off to this thug,” Linah begged.

“I am sorry, chief. I am their uncle. I cannot give her away. I am merely looking after her and her sister. Please don’t take her away,” her uncle tried to reason with the chief. "You don’t have a choice, old man,” the pirate laughed. “I will come back here tomorrow at the break of dawn to get your answer.”

They begged the pirate to let Linah go, but the cruel man had made up his mind.

“I will be back. You can come with me willingly or put up a struggle. Either way, I will make you my wife.” And with that, the pirate and his men left the house, leaving the sisters sobbing. Their uncle knew that there was nothing else he could do to save Linah. However, their joy was short lived. The chief and his men appeared at their uncle’s doorstep. The sisters begged not to be separated. Minah fell at the pirate’s feet but he kicked her away.

Without a warning, the men pulled Linah out of the house and brought her to their chief. He dragged and carried her out to his boat.  Minah ran after her sister, pleading with the pirates to not separate them. She begged for them to take her too but her pleas fell on deaf ears.

The pirate and his men jumped into their sampan and rowed away. Linah cried out for her sister. She tried to jump into the water and swim back to shore but the leader of the pirates grabbed her arm tightly, keeping her in the boat. Minah knew that she had to go after her sister before the pirates got back to their ship with her sister as a captor. She ran into the water and swam furiously trying to catch up to the sampan before it reached the junk ship. She called out for Linah, promising her sister she would come for her.

The further Minah swam, the choppier the sea got. Rain clouds started gathering overhead. The sky crackled with lightning and roared with thunder. A storm was brewing. Minah gasped for breath as the waves tossed her about in the sea.

Then, the dark skies tore open. Raindrops pelted down on her. Small rolls turned into gigantic waves. They came crashing down on her tired body relentlessly, the current pulling her underwater. Still, she surfaced and swam towards the boat. She was determined to be reunited with her sister. Suddenly, a gigantic wave slammed into the sea, sending a surge of ripples all the way to the boat. Everyone on the sampan lost their footing. The leader of the pirates released his grip on Linah. Without wasting a second, Linah threw herself into the heaving sea. She swam towards her sister but she was losing sight of Minah fast.

As Linah got closer, she could only see Minah’s hand in the distance. All she needed to do was reach out for her sister's hand and pull her up.

Just as Linah was about to grab Minah’s flailing hand, a towering wave came crashing down, swallowing up both sisters and pulling them apart.

The sky roared, drowning out the sisters’ last words. The storm did not let out. It rained all day and all night. Linah and Minah never came back to shore.

The next day, as silence engulfed the calm seas and the village at dawn, the villagers rose from their beds and stepped out onto the beach to see if the sisters had made it back to shore.

What greeted them was beyond anything they could have ever imagined. Where the sisters were last seen, stood two islands that did not exist the night before. One faced the open sea, and the other was not far away from it, its shore facing the other island. According to stories that people have told over the years, that was how the two islands came to be known as Sisters’ Island. Many also shared tales of how on the day the sisters became islands, a storm would break free, as if reminding people of the love of the two sisters who could not bear being separated.

Did you know that while Singapore is a tiny nation, it has 64 islands to its name? Click the squares and solve the puzzle to find out more about some of these islands that make up the Lion City. 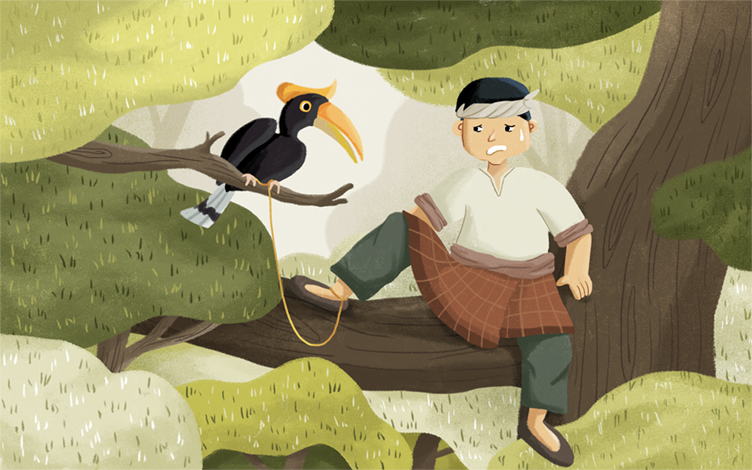 5 ways to entertain yourself – kampong-style Holiday crafts for all types of kids