T. Sasitharan pays tribute to the dramatist and arts activist.

It takes a supreme effort of imagination and will to think of one’s own imprisonment, without trial and often in solitary confinement, as a time of “solitude” and reflection.

The title of this essay celebrates the soaring imagination and the indomitable will of one artist who dominated the Singapore theatre scene in the 1980s. It is the first line of a poem that the late Kuo Pao Kun wrote on a card he made for his wife, Goh Lay Kuan, during Lunar New Year in 1977. Pao Kun had been detained under the Internal Security Act the year before and would eventually spend four years and seven months incarcerated by the state.

More than imagination and will, it takes an immense benevolence and an unbridled faith in humanity to transform an experience of such terrible bitterness into the picture of beauty, which is the poem. This, precisely, is the work and the responsibility of an artist.

Kuo’s release from prison in 1980 and his immediate return to doing exactly what he was doing before he was imprisoned—making theatre and art—was the single most important reason the 1980s were such a significant and scintillating decade in the history of Singapore English language theatre. In effect, the whole enterprise of English language theatre was reborn in the 1980s as artistic practice; our very own artistic practice, capable of holding up a mirror to ourselves.

Singaporeans took ownership of Theatre as art in the 1980s. It was no longer merely a form of cultural production. A new generation of practitioners became conscious of the potential of English language theatre as art, becoming alive to the need for theatre to both shape and reflect the conscience of the young nation. Prior to the 1980s, this sensibility was almost entirely the sole preserve of people working in the Chinese language theatre in Singapore. Inevitably it was limited by language to Chinese speaking audiences.

The 1980s were a watershed decade for English language theatre in at least two senses.

First, it was a time of awakening and reflection for practitioners; of the recognition of a new confidence and frenetic – even febrile – activity. It was also a time when theatre, for the first time, using the English language, could reach across linguistic boundaries and create new audiences. There was nothing like it before the 1980s and there has not been anything like it since.

We have to remember that the English language theatre scene in the 1980s existed in a totally different social, economic and political context than today. The ecology and reality of making theatre then was significantly more dependent on and driven by the will of individual artists rather than on state-led infrastructural support and cultural policy.

The period under review predates the establishment of the National Arts Council, the Esplanade and all of the other producing and presenting capabilities that are available to theatre artists now. Even the seminal “Report Of The Advisory Council On Culture And The Arts”, chaired by then deputy prime minister Ong Teng Cheong, which effectively laid the foundation for the sector’s development here, came out only in April 1989.

However, Kuo’s release from internment coincided with a time when the economy, despite a recession, was growing in both size and strength. Singapore’s early bet on taking the capitalist high road to growth and development was beginning to pay off. Innovation, productivity and training were the bywords then as the nation sought to climb out of the pool of regional poverty and up the economic value chain, moving away from menial, labour-intensive industries to high-tech, higher value-add economic activities.

The winds of change were also blowing through the political scene in Singapore. The 15-year single party representation of the People’s Action Party’s in government began to alter with the election of opposition party members J.B. Jeyaretnam (1981) and Chiam See Tong (1984) into parliament. This was also when the Group Representation Constituencies (GRC) was instituted, and the expectation of leadership succession of then Prime Minister Lee Kuan Yew was in the air.

Although it was a time of change and uncertainty, there was also new confidence in the air. Perhaps it was the confidence of the parvenu. The traumas of birth and the new beginnings of nationhood had receded enough for us to be able to look forward with a good measure of assurance and optimism. English language theatre practitioners, in particular, sensing the new spirit of the times, seized the day and opted to revitalize the art form.

The lingering ghosts of aversion towards “local” or “homegrown” English plays which had haunted the scene throughout the preceding decades, born of a postcolonial “cultural cringe” were firmly and finally laid to rest. A new breed of theatre artists, such as Ong Keng Sen, Ivan Heng, Alvin Tan, Haresh Sharma, William Teo, Kok Heng Leun and Elangovan were committed to both working and learning. They relished the possibility of discovering new and distinct Singaporean stage voices and presences.

To this end, if no ready script or finished writing was at hand, these artists were prepared to workshop or devise new texts. The result was a shift away from the writerly and the literary, towards a more presentational, corporeal and gestural performance idiom.

Inspired principally by the practice of Kuo Pao Kun, actors, directors and even playwrights here were alive and open to the creative potential of para-theatrical disciplines like Taiji, Yoga and traditional Asian theatre forms such as Bejing Opera and Randai. These new methods of working and crafting were evident in several seminal performances in the 1980s including Three Children (directed by the late Krishen Jit and Ong Keng Sen), Over The Wall (Ivan Heng), Medea (the late William Teo) and The Silly Little Girl and the Funny Old Tree and Mama Looking for Her Cat (Kuo Pao Kun).

Even though emerging English language theatre makers of the 1980s were more alive and open to new forms of theatricality and new idioms of performativity, synthesizing disparate elements from the panoply of world theatre, they also were always receptive to new writing from Singapore playwrights.

Alvin Tan’s collaborations with Haresh Sharma, for instance, which would find full fruition only in 1990s, undoubtedly started in the 1980s. The phenomenal success of Stella Kon’s Emily Of Emerald Hill, directed by Max Le Blond for the 1985 Drama Festival, and its subsequent invitation to the Edinburgh Festival Fringe, served to cement the literary legitimacy and theatrical viability of the Singaporean play in English.

Although Kuo’s directorial efforts and his teaching work—more than anyone else’s in Singapore theatre—were instrumental in provoking awareness of the inherent disjunctions in theatre between the dynamics of performance and the written text, between the word and its playing, his work as playwright moved in the opposite direction – inscribing the plural intricacies of world theatre performativity into local drama. This embrace of diversity and difference is a characteristic of his writing. Already evident in his early mono-dramas of the 1980s, The Coffin is Too Big For The Hole and No Parking On Odd Days, it achieved fuller flowering in the 1990s with Descendants of the Eunuch Admiral and The Spirits Play.

It was in the 1980s, mainly due to the influence of Kuo, that practitioners of Singapore theatre in English began facing up to the responsibility of being artists. As a result, over the last 30 years, theatre, more than literature, the visual arts or any other single art form, has become inordinately significant to the critical discourse on identity/ies in Singapore.

The processes of articulating, expressing and critiquing notions and representations of “who we are as a people”, “who I am as a person”, “what are the values or beliefs that animate me/us”, are essential in a milieu as complex and as dynamic as Singapore’s. Dealing with a wide range of human and personal issues from politics, race and LGBTQ life to love, aging and education, the theatre has been a site for enquiry, provocation and intervention.

Before the advent of social media platforms, theatre enabled and empowered the most active public intellectual space here for the airing of citizen and community-interest issues. This was so especially of those issues that were critical of conservative norms, controversial or politically progressive.

Singapore theatre gave voice to the voiceless, validated the consciousness of minorities and stood for the conscience of the people. The fact that it was a critical voice of reason for marginalised minorities, albeit briefly before social media took over, may be traced to the “coming together” that happened in the 1980s. There was a conscious and conscientious congealing of quite different and disparate resources, perspectives, approaches and strategies of making and watching theatre in the multicultural, polyglotal improbability that was Singapore.

As he was so pivotal in making the moment when Singapore theatre started asking the fundamental questions, Kuo Pao Kun should have the last word:

…This is why sometimes things happen and I want to ask, 'Who are you and where are you coming from?' 'What is your stake in this action?' 'You may be very hot today but tomorrow I don’t see you anymore.' 'How can I work with you?' 'Do you stake your interests in your actions?' Two weeks later, I don’t see this person anymore. I think that is to me, essence of my dilemma. I think this is common to probably all artists in Singapore.

Maybe this statement is too absolute to make, but how does one create a sense of self in this huge system? When you talk about the whole capitalist system, I simply don’t know how to deal with it. Does anybody know how to deal with that? I don’t think I can create an alternative to that before I begin to make sense of myself and the kind of art I intend to do.

This is the biggest problem. It is as real as walking the next step. If I don’t think about making the next step and ask questions of such fundamental significance, I just can’t deal with the government in any way. I don’t have the strength or energy because I haven’t done my own work. I just respond to what they do to me.1

T. Sasitharan is co-founder and director of Intercultural Theatre Institute.Prior to this, he was artistic director of The Substation (1996 – 2000), arts critic and editor with The Straits Times (1988 – 1996), and philosophy tutor at the National University of Singapore (1983 – 1989). In 2012, he received the Cultural Medallion– Singapore’s highest honour for artists.

This essay was first published on The Studios microsite in 2015, as a resource for The Studios: fifty series, an Esplanade Presents programme. 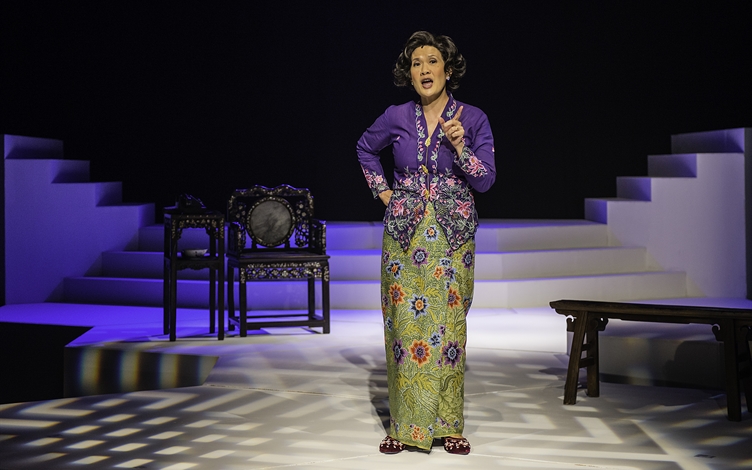 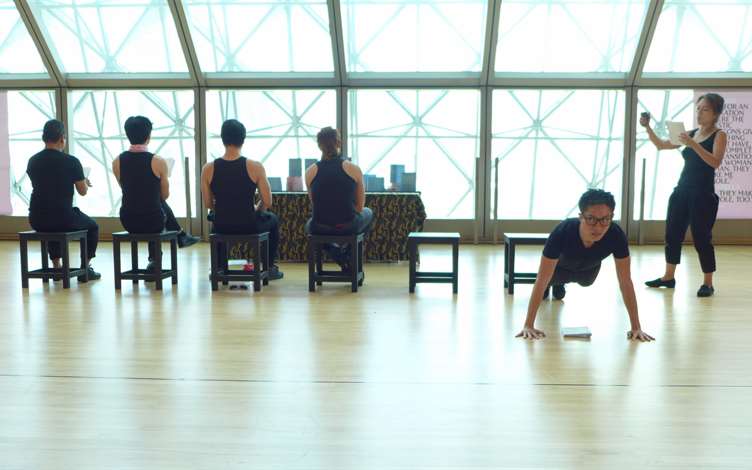