Kenneth Kwok on Singapore playwriting from 2000 to 2010

A decade of daring and mature narratives and experimentation

The 1980s was the decade when English-language Singapore theatre really started to come into its own with the formation of key companies such as TheatreWorks and The Necessary Stage, and the production of landmark plays by Kuo Pao Kun, Michael Chiang and Stella Kon that were distinctly Singaporean in their cultural context and concerns.

The 1990s can be said to be the period of our adolescence: the era is marked by plays such as Russell Heng’s Lest The Demons Get To Me, Tan Tarn How’s The Lady of Soul and the Ultimate “S” Machine and Eleanor Wong’s Mergers and Accusations, which spoke loudly against conventions of politics and sexuality. The theatre landscape in the 2000s was arguably more difficult to reduce to such singularities. This is because, as our scene became more mature, it gained confidence in its identity, an identity that celebrated a rich multiplicity of content and style.

Yet, it is always the controversial that draws attention, and few topics raise eyebrows in Singapore as much as homosexuality.

So despite the range of different issues being explored by playwrights in the 2000s, I remember a friend remarking to me back in 2010 that she did not watch much Singapore theatre because it only ever seemed to be about gay issues. An exaggeration, certainly – but original works such as Desmond Sim’s Autumn Tomyam (ACTION Theatre, 2000), Haresh Sharma’s Mardi Gras (The Necessary Stage, 2003), and new instalments of Alfian Sa’at’s Asian Boys and Wong’s Invitation to Treat series (The Necessary Stage and W!LD RICE, 2000 – 2007) did continue to bring the issues of gay men and women to the forefront following the emergence of plays addressing HIV and AIDS in the 1990s which also tended to be led by non-heterosexual protagonists.

It is a shame that many chose to dismiss these works: some of them may indeed have been raunchy and raucous but they were also extremely insightful, tender and poignant; their themes such as prejudice, love and loss often extending beyond the interests of a specific minority community. Ovidia Yu’s sinewy Hitting (On) Women (ACTION Theatre, 2007), for example, which investigated domestic abuse, is no less relevant because the story involves two women rather than a man and a woman.

Of course, the social commentary of Singapore theatre extended beyond sexual orientation.

To take just one company, W!ld Rice alone offered us diverse plays like Alfian’s stayers-vs-quitters family drama Homesick (2006), Wong’s The Campaign to Confer the Public Star on JBJ (2006 and 2007) and Yu’s The Silence of the Kittens (2006) which, together, covered an eclectic range of socio-political content, including cat-culling by the Agri-food and Veterinary Authority.

Works which directly wrestled with the especially thorny issues of race and religion also became more visible during this period. One example is Alfian’s stirring Nadirah (Teater Ekamatra, 2009) where a tangled love story intersects with political life on a university campus to challenge the simplistic dichotomies we have devised to define racial and religious differences. Chong Tze Chien’s Charged (Teater Ekamatra, 2010) also springs to mind. Its conceit is a clever one: the deployment of non-Chinese soldiers for guard duty at army barracks during the Chinese New Year season is natural to us; less expected is how Chong uses this set-up to investigate the complexities of race with brutal, bloody force – and in the context of national service, no less.

Both plays served as testament to a growing boldness in Singapore theatre: it is hard to imagine them being staged in earlier decades – though one must acknowledge that there were still plays that ran up against a brick wall. Elangovan’s Smegma (Agni Koothu, 2005), for example, was not able to secure a license from the Media Development Authority because it was said to “[undermine] the values underpinning Singapore’s multi-racial, multi-religious society"1. Engaging the mind and the heart

But after the feathers have been ruffled, the works must stand on their own merit. Sharma’s award-winning trilogy of Fundamentally Happy, Good People and Gemuk Girls (The Necessary Stage, 2006, 2007 and 2008) is acclaimed as much for its incisive examination of taboo topics such as sexual abuse and political detention as it is for being a set of thoughtful, sensitively written plays marked by compelling narratives and vivid characters: the heart is engaged as much as the mind.

Years later, I still remember Eric, the confused young man returning from overseas, burdened by a terrible secret from his childhood; Radha, the elderly but vivacious hospice resident who, in Good People, justifies her reliance on marijuana with the argument that “illegal doesn’t mean wrong … just illegal”; and Juliana, the troubled young Malay woman who questions her role in Singapore society not only as an ethnic minority but also as the daughter of a man imprisoned for being a traitor to his country, a father she has not seen since her childhood. These played to small audiences in a tiny Black Box but they roused those that saw them to fierce debate, and also laughter and tears.

There are, of course, also the plays that premiered quietly to little sensation but have endured in the public’s consciousness because of their resonance and continued relevance. One example is Jean Tay’s Boom (Singapore Repertory Theatre, 2008): through the story of a young go-getting Singaporean who seeks a better future at the cost of his past, Boom made us question the impact of a rapidly progressing Singapore on everyday citizens – and was subsequently selected by the Ministry of Education to be an O- and N-Level Literature text.

Together, all these works speak perceptively and powerfully about what it truly means to be Singaporean. In portraying us via a diversity of racial, religious, gender, and class perspectives and with all our compassion and grace, fear and greed, they remind us of who we are as a people – and ask us who we want to be.

In terms of aesthetics, the 2000s was also an era of experimentation. The look, shape and feel of productions began to evolve, with more theatre-makers forgoing linearity and opting, instead, for alternative forms of staging.

Encouraging this innovation were advancements in technology which offered new possibilities for multimedia; increased government funding for a much wider variety of work than before; and a growing audience in Singapore with an appetite for the non-conventional. TheatreWorks, The Necessary Stage and spell#7 continued to push artistic boundaries as new players such as Cake Theatrical Productions stepped forward to help re-imagine what theatre could be. Cake’s Artistic Director Natalie Hennedige not only created towering works like Queen Ping (2006) and Temple (2008) but also launched the company’s Decimal Points series, a platform for uncompromisingly avant-garde fare by new theatre directors.

Traditional narrative structures are often eschewed in works from Cake but, whether bewildering, grotesque or silly, the plays exhilarate the senses and always give you much to talk about after the show. The Finger Players is another such company: originally a children’s puppet theatre company, the group, under Chong who joined as Company Director in 2004, has produced works for adult audiences such as Wong Kar Wai Dreams (2007) and Poop (2010) which employed puppetry, object theatre, mime, multimedia, and inventive lighting designs to surprise, delight, frighten and alarm.

You would think that in such fragmented, kaleidoscopic works, the scripts would be secondary, but I would argue they need to be even stronger to lay a solid foundation for the worlds that emerge: Hennedige’s Nothing (2007), invigoratingly ambitious in scale yet painfully intimate in feel, is just one example. Similarly, even if simply read off the page, the agile lyricism and crushing weight of Chong’s HDB-set The Devil and the Deep Blue Sea (2005) leave an indelible mark.

The impact of surtitles

One particular highlight of the past decade has, for me, been the increased access to plays of vernacular languages. The technology for surtitling had always been there but it had not been fully exploited until the early 2000s. Whole worlds of theatre became accessible to different segments of the public.

As a Chinese Singaporean with limited Mandarin proficiency, surtitling provided new opportunities for me even with regard to Mandarin theatre, allowing me to more deeply appreciate the work of Drama Box and The Theatre Practice, for example. One of my favourite plays is Zizi Azah’s playful but wise-beyond-its-years Bagaimana Kucing Jadi Gemuk? (or How Did the Cat Get So Fat?) by Teater Ekamatra (2006), a work in Malay I would never have been able to see otherwise. Credit must be given to the joyous performance by actress Siti Khalijah, but the sharply written monologue offers its own rewards – reminiscent of Antoine de Saint-Exupéry’s The Little Prince, it follows a young girl on a journey of discovery, one that reveals more about the human condition than it does space and time.

More importantly, surtitling also opened up fresh options in terms of multi-language plays that have the capacity to embrace us all. Kuo’s canonical Mama Looking for Her Cat showed us that theatre can transcend language way back in the 1980s but, without surtitling, a consistently multilingual, text-heavy work like Sharma’s Model Citizens (The Necessary Stage, 2010) which was performed in English, Malay and Mandarin depending on which character was speaking, would have reached a very limited audience indeed.

1 Chong, Terence. The Theatre and the State in Singapore: Orthodoxy and Resistance. UK: Routledge, 2011

Transcript of Fear Of Writing? The Development of Political Theatre in Singapore

Actress Janice Koh moderated a panel discussion, title Fear of Writing?, held on 9 May during The Studios: fifty season in 2015, where theatre makers Alvin Tan, Ivan Heng, Robert Yeo and Tan Tarn How shared their views on how political theatre in Singapore has developed over the years and the different approaches employed in presenting productions that have courted controversy.

I am a theatre maker, and theatre has to do with conflict resolution, and drama is based on conflict. Conflict denotes a struggle… it is always between opposing views, and it’s always about power.

Kenneth Kwok has been an arts educator, administrator and writer for many years. He was a theatre reviewer with the now-defunct online arts journal The Flying Inkpot from 1999 to 2012 and its co-editor from 2002 to 2015. Find out more in the archives of The Flying Inkpot.

This essay was first published on The Studios microsite in 2015, as a resource for The Studios: fifty series, an Esplanade Presents programme. 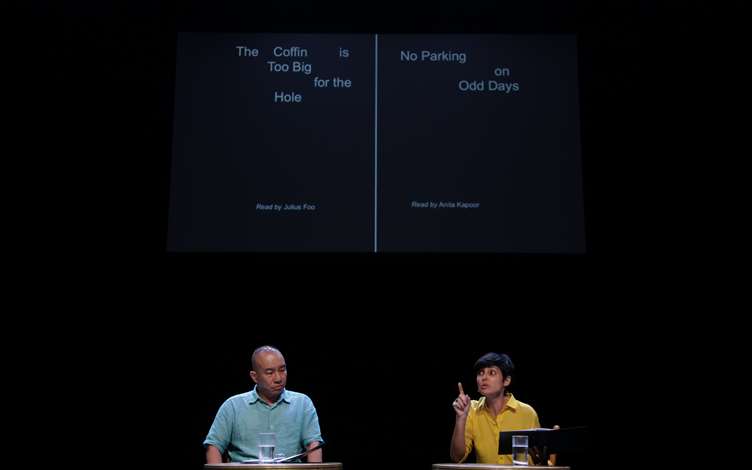