All it takes is a mask and your imagination.

Masks are special things. You put it on. You trust. You just look into a mirror and wait. And if you trust, the mask will choreograph your body. The mask will tell you what to do.

Donning a mask opens an artist to endless possibilities. Whether it’s an actual mask or painting on a new face with make-up, here’s a look at how different performance traditions transform you into a celestial hero, an intimidating ogre or comical sidekick. Kathakali is a form of Indian traditional dance that is known for its elaborate and striking costumes and make-up. There are five basic make-up styles, known as vesham, and pacha, literally meaning “green”, is one of them. Pacha characters are heroic or virtuous, and include kings and deities.

Kathakali is traditionally performed by an all-male troupe and some performances last over a few nights, starting at dusk each day. In Japan, Kagura refers to a sacred Shinto ritualistic theatrical dance that is performed to the gods, and Iwami Kagura is the form that originates from Iwami in the Shimane Prefecture, a coastal region rich with Shinto mythology. A popular tale told in Iwami is of Susano-o, god of the sea and storms, slaying the eight-headed and eight-tailed serpent Yamata no Orochi. Hailing from Eastern India, Seraikella Chhau is the traditional dance originating from Seraikella in Jharkhand. Traditionally performed by all-male troupes, Seraikella Chau does not use dialogue, and portrays a wide range of stories and topics through evocative and poetic movements.

There are three types of Chhau, and Seraikella Chhau is one of the two that uses masks. A Cambodian classical dance performance at dans festival in 2007

There are four main role types in Khmer classical dance. Ravana is classified under the yeak role, which includes ogres and asuras. Moyang Bojos (the spirit of an ogre)

For the Mah Meri people of Pulau Carey, each intricately carved mask represents a specific moyang, or ancestral spirit. They put on these different masks during happy occasions and perform the main jo’oh dance to invite their ancestral spirits to join in the celebrations with them.

The Mah Meri mask dance is the only known mask dance practiced by an indigenous community in Malaysia.

More about the Mah Meri dance Oni Kenbai folk dances can feature up to eight dancers, all wearing matching costumes and fearsome masks in five different colours. Despite the name “Oni”, meaning “ogre” or “demon”, the dancers each represent a different incarnation of Buddha, and are led in energetic and lively dances by the white-masked Buddha.

The art form is kept alive by children in Kitakami, who learn it in school and then perform the Oni Kenbai in local festivals. 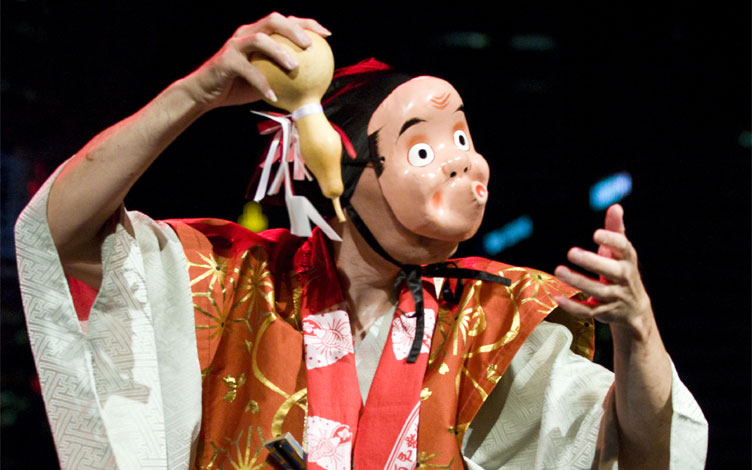 Japanese Kagura performance at A Tapestry of Sacred Music in 2009

Hyottoko is a lucky spirit with mythical origins, and different regions of Japan have their own myths about Hyottoko. In Japanese dengaku however, Hyottoko is portrayed as a comical figure that accompanies the traditional dancers.

Hyottoko gets his name the Japanese words for “fire” and “man”, and blows fire through a bamboo pipe, which explains his expression. Malttugi is a comic character who is a wisecracking servant to an unwitting nobleman.

There's more! Find out about other masks and make-up in part two of this series. Faces in Performing Arts continues here