Odes to the stage and the Esplanade Theatre

Postcards from the stage

After being closed to audiences for almost nine months, no thanks to the COVID-19 pandemic which ground all live performances to a halt, the Esplanade Theatre finally stirred back to life. #THEATRE, the production created by design collective INDEX for the cavernous Theatre space from 14–17 Jan 2021, was an immersive yet open-ended experience that seemed to put the focus squarely on the audience’s response. Just as it could not have been created in any other space, it was also impossible to divorce the piece from the time in which it had been created.

We invited 250-word reflections from seven people who experienced the work and have different connections with the theatre—as performers, playwrights, technical theatre professionals, arts critics and audience members. These #THEATRE stories were first published on Esplanade’s Instagram account. They are a snapshot of an unusual encounter with a storied space, and a rumination on these strange times.

All images are of the production #THEATRE by INDEX. Photo credit: Crispian Chan.

There is an industrial brutality to the Esplanade Theatre’s stage that I had never appreciated before. The harsh beauty of this construction of steel, concrete and machinery was the star of #THEATRE by INDEX, a wonderfully immersive experience by lighting veteran Lim Woan Wen, sound artist Darren Ng and spatial designer Lim Wei Ling.

Seated on the stage of the Esplanade, then lying down to appreciate the intricate architecture of the multiple flybars, I thought about the myriad productions I had seen on this stage, and of the many theatres I have sat in over the years, cocooned comfortably in my seat, while the hard labour of embodying imaginations was carried out behind the curtain.

The steel staircases that opened the show brought to mind the sets of Rent, Kurt Weill’s Street Scene and the movie Fame. They are the classic signifier of New York’s cityscape. The evocative lighting turned a functional feature into a mnemonic trigger, simply by virtue of framing, courtesy of someone else’s eye.

#THEATRE distilled the essence of the medium by highlighting how the bare bones of this box could be brought to life simply by looking, and looking through someone else’s eyes. The true glory of theatre is how such gossamer threads of human imagination are incarnated in this space.

When I was invited to preview #THEATRE, I had a good sense of what I would be in for. Familiar with Woan Wen and Darren’s work, I was a fan of their aesthetic sensibilities: minimalist yet emotive. Indeed, even though I was aware that there would be no actors, no plot nor even any text, I knew that just being in the familiar theatre space would evoke all the memories I’ve had performing on it, juxtapose that with the weight of the collective struggles the industry has endured over the past year, I expected to feel a little emo.

There is a term I have been hearing more of in recent years—“holding space”. I understand it as a way to support someone by being present physically, mentally, and emotionally, whilst withholding judgement and expectations. It was with that in mind that I attended the show—I wanted to express my support and solidarity for local theatre by just being present.

In the first 5 minutes of the show, I thought to myself, how nice to be back on stage, the simple and subtle design tastefully presents the theatre mostly as it is. However, 20 minutes into the show, I was lying there on the stage floor with legs akimbo and tears streaming into my mask, taking turns between processing bundles of complex emotions, reassessing my creative priorities, and simply enjoying being bathed in stage lights again. It was then that I realised that in carefully balancing rarefaction with restraint, the designers were in fact, holding space for me.

I don’t think #THEATRE said anything new, in fact I believe the point of the endeavour was to say nothing at all. Like friends sitting in silence through grief, I felt safe and comforted. That, is true theatre magic.

Joanna Dong is a jazz vocalist and actress.

How do you take in the measure of a space? I am seated on the stage of Esplanade Theatre, part of the audience for #THEATRE by design-led collective INDEX. It is large, with access to three extended wings used to store large equipment. Slowly, other parts of the space are given attention, lit with aching tenderness. On the fourth side are the velvet curtains, drawn.

This is theatre as a body. I am buried deep inside—encountering its joints, its bowels, its organs and innards with a frisson of forbidden wonderment.

We sit and squirm on cute circular cushions. Each sound adds something to the anthropophony, which reminds me that we are all connected. Tethered. Our designated spots are fixed a metre away from the next person, which limits our choreography, but it sets the tone for the pièce de résistance. When the flybars come down, as if from the heavens, they cascade with the combined quality of a cat falling through treacle and a particularly ethereal alien visit.

This is theatre as a lover you haven’t seen in a while. You are revisiting their crinkles, warming up to old rhythms and settling into a shared comfort.

When the curtain is inevitably opened, it’s the Chekhov’s gun you didn’t quite want firing. You feel like the encounter has slipped past you too quickly. And now you’re seeing your beloved through the wrong end of a telescope, retreating. All you remember is the illuminated exit sign, and then darkness.

Nabilah Said is a playwright, art critic and the Editor of ArtsEquator.

I can't recognise people I know anymore—it's the mask and having been a hermit for too long. Is it really you, I think, studying the unfamiliar contours of faces, shrunken or expanded bodies. In public places, I come grinding to a halt before entrances and exits I once took for granted, now sealed off, or shops that have closed suddenly. I have to re-navigate this city, fire up the synapses again.

And now, for the first time in a year, I am watching a performance—but on an empty stage. In fact, I am seated on the stage floor, together with a small group of (socially distanced, she says with a loud whisper) fellow travellers. There are no performers. Maybe we are the performers, the voices and echoes playing in our heads, pivoting off shafts of light and pinpricks of sound.

I see my fellow travellers slowly relax and lie on the stage floor, as by design, the gears turn and the theatre yields its secrets. Or rather, new codes are being telegraphed to us, amidst the madness outside. I lie down too, the intrepid theatre-goer and onetime critic, ready to unlearn all that I thought I knew.

Clarissa Oon is an arts writer and Esplanade’s Head of Communications & Content.

There's a certain comfort in dualities. The perennial battle between x and y is a constant in the annals of history. When there are only two sides, it's easier to declare a victor—wrap it up and onto the next. More drugs to feed the narrative addiction.

The theatre space is an expansive universe much like the one it resides in. The endless search for meaning is certainly identical. #THEATRE compels a meditative headspace, a slow burn that begins by dwelling on the contrast of light and dark. A gleam, shimmer and iridescence shine the spotlight on our lust for lustre. Everyone loves the underdog. The thesaurus turns up little on the other side of the road, even as we sit in the dark’s relentless embrace. Why is this?

Our limited perspective of the universe lends weight to this societal narrative—when we look beyond, the abyss doesn’t so much stare back into us as much as time cheekily winks. I like the dark and I keep my personal space unlit. Yet I don’t seem to grasp it at all. Perhaps that ultimately isn’t the point, and the cut of my jib simply needs whetting. It's hard to find the sharpening stone when it’s so dark though.

There are so many ways of finding you, but none that takes me out of you. To know you is to study you; I am your student, and you are my teacher, mentor and friend all rolled into one. I’ve sought to know everything there is to know about you. To encounter you is to live through you. Our years are not measured by time but by the productions we have had together. I may have known your name from the annals of history, but at our first meeting you felt at once familiar and close as though I had lived through you throughout the ages. I swear you have always been in my blood. Your curtains are my second skin; the pipes and innards that run through you are my arteries; your matrix of grids and bars houses my soul; the architecture of your being are my bones; my heart pulsates as your light does. Even in your emptiness, you feel intimate. Everything seems more real in your make-believe world. Some say you will never come back, or you would change forever, but I still see you in my dreams, haunting my mind and consciousness. You played with my heart and danced around me as a ghostly reminder that everything is immaterial. The crowds may not gather for a while more in your temple, but you will never go dark even if your lights have dimmed. I feel you despite your harrowing absence. I speak your language even in your deafening silence. I still breathe you in-between living and dying. I am because you are.

Chong Tze Chien is a director and playwright, as well as a core team member of Singapore theatre company The Finger Players.

The experience of #THEATRE evoked mixed feelings in me.

On the one hand, it reminded me of the awe I felt for this space almost 20 years ago when we opened the Esplanade Theatre. I had the privilege of working here as the first technical and production staff through much of its construction, opening pangs and exciting early years from 1997 till 2004. Now that I have returned to work for the Esplanade in 2021, experiencing the Theatre, through the poetic sights and sound of the work crafted by INDEX, brought back all the excitement from all those years ago. The passing of almost 2 decades has not diminished the possibilities that this theatre space offers.

On the flip side, I was also filled with a sense of melancholy because where I was seated on stage, there should have been performers. The dramatic presentation of the auditorium also accentuated the fact that it was devoid of any audience. This pandemic has not been kind to everyone, but it has been especially cruel to our industry. No amount of digital substitute will fill the void of any empty theatre. Theatre is a people business where there is a "live" relationship between performers and audience.

I look forward to the day when I can again be in that auditorium filled with a house full of appreciative audience members being moved by an inspiring production. This is what makes "theatre".

Kenny Wong is the Head of Technical Production at Esplanade. 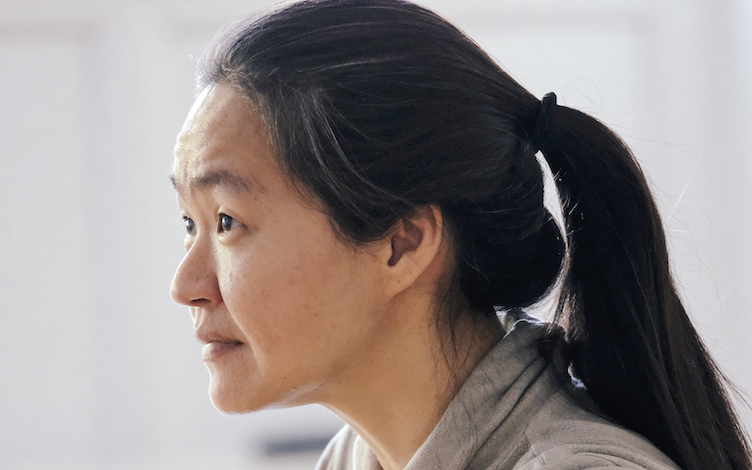