In these unusual times, our minds wandered and came to rest upon the little known perks of staying home. In a bid to spread a little positivity and shed some light on what we can be grateful for, we asked nine individuals, both artists and writers, to share their mini stories about stay-home joys and inner-self revelations, in this series originally posted on Esplanade's Instagram account.

All illustrations by Beverley Ng.

A post shared by Esplanade Singapore (@esplanadesingapore) on May 4, 2020 at 7:47am PDT

She was worried about the 28-day stay at home measures. Every day for the past many years she wondered so often where he was, what he was doing, waiting for him to come home, waiting and wondering. She wondered at the cruelty of waiting. Now for the first time she would know exactly where he would be. In the first days she tried to be still, keeping as far away so she wouldn’t disturb him, dealing with the stabbing feeling in her heart every time his phone buzzed…which happened a lot, sometimes deep into the night. She had taught herself not to ask but hadn’t yet learnt how to deal with the constant ache of it. Then sometime in the second week, things went quiet, both his phone and him. She noticed that he was in mourning. The way he stared from the window at the tree tops. Smiling weakly at her, his eyes saying something like "I need you?" she couldn’t really tell. Without distraction, they started to actually do things together—meals, tv, evening walks, reading side by side. Things that she had dreamed of for years. Strangely and very surprisingly, she also noticed something else was happening within her—disinterest and restlessness. With each passing day he became smaller, less colourful to her while every other little thing became intensely interesting – the tiny ant that made its way across her desk to god knows where. The birds singing outside filled her senses anew. This was the perk she realised. The perk was a realisation for her that when things went back to normal, she would no longer live the way she had been allowing herself to. She was changed. She had changed herself.

Natalie Hennedige is a performance director and writer, known for her singular artistic language and creative vision exploring contemporary issues through highly constructed heightened worlds with collaborators from diverse artistic disciplines and cultural backgrounds. She served as the Artistic Director of CAKE Theatre before her current position as Festival Director Designate for Singapore International Festival of the Arts.

A post shared by Esplanade Singapore (@esplanadesingapore) on May 5, 2020 at 8:35am PDT

1. In the mornings, he insists on sitting on my lap while I am having online meetings with my colleagues at Checkpoint Theatre. Often, he refuses to wear any clothes. Having a naked child take up most of my webcam, sporadically shouting “HELLO!” to people, has brightened up some of these more serious discussions.2. Being able to catch that sudden impish grin on his face when he says, “Mummy, poop poop!” So I set my work aside, kneel down to remove his soiled diaper and wipe his backside—one of the most humbling and intimate moments of motherhood—he trusts me fully with his body, the body I carried within my womb and will continue to carry, for as long as he lets me.3. Being able to have slower and gentler nights together; not having to rush home from work to pick him up from the childcare where he is crying because he has missed me so much. Being able to say goodnight to him and kiss his forehead and smell his hair, before the chaos of the next day beckons.

Faith Ng is the Associate Artistic Director at Checkpoint Theatre.

A post shared by Esplanade Singapore (@esplanadesingapore) on May 6, 2020 at 8:17am PDT

In the halcyon days of pre-circuit breaker, home was more of a place of transit. My mind was like a train headed off to a million places at once. Now I find myself with pockets of time where my mind is more at rest—not completely, because there’re still many things to think about, but enough. I like sitting in my living room at dusk, admiring my potted plants and wondering if they need watering again (their names are Plant B, Plant C, Plant D and Planta). My one creative outlet has been writing poetry, which I’ve been doing more of because of @SingPoWriMo (Singapore Poetry Writing Month). I’m also learning how to listen to myself better—whether that means recognising when I need to check in with my friends, send my mom a text or give my body a good stretch.

Nabilah Said is a playwright, arts writer and poet, and the founder of Main Tulis Group, a Singapore- and London-based collective of playwrights writing in Malay and English.

A post shared by Esplanade Singapore (@esplanadesingapore) on May 7, 2020 at 7:03am PDT

I was supposed to be based in London this year, and my wife was about to leave for Korea for a ceramics apprenticeship. We made it back by a hair just before the borders closed, but at least we are home and safe.While trying to adjust to working from home, we also decided to foster a cat during this period. She’s blind and was badly traumatised by other cats trampling on her when she was living in the shelter. She’s still very timid, but somehow she’s taken a liking to us and letting us give her belly rubs. She seems to like that over any treat.My wife and I are used to working long hours apart, but now we get to take breaks and spend some extra time together with our new foster feline.In the midst of all our anxieties about the future, having her around has brought a sense of calm into our home. I think we will keep her and do our best to give her a good life.

Charlie Lim is a singer-songwriter/producer based in Singapore. He's gathered accolades and prominent festival slots, including two sold-out shows at the 10th Mosaic Music Festival, an album launch at our 1,600-seat Concert Hall, and had a central role in writing and performing the theme song for Singapore’s National Day in 2018.

A post shared by Esplanade Singapore (@esplanadesingapore) on May 8, 2020 at 5:44am PDT

The above dialogue unfolds in a WhatsApp chatroom.

Chong Tze Chien is an independent director and playwright, as well as a core team member of Singapore theatre company The Finger Players that specialises in the fusion of puppet theatre and other art disciplines.

A post shared by Esplanade Singapore (@esplanadesingapore) on May 9, 2020 at 8:00am PDT

It’s my first time hosting a local contact improvisation dance jam via Zoom. I love the hunger with which we are dancing at this time. Connection of personal spaces! Automatic child and family inclusivity! “Visits” from friends in distant places! I have a voluntary studio cleaner in my toddler! There’s space in my tiny study that I never knew I had: between the cat litter box and the cupboard. There’s a settling of focus and sense of release that I didn’t know I needed. I also love that the transfer to the online platform has prompted a rare discussion among our community on privacy, and about making norms and consent explicit in shared spaces. Who knows what this dance form will look like if we ever return to “normal”, but I hope that my body will carry all of this knowledge there.

Chan Sze-Wei is a Singapore-based choreographer and film-maker. She is also a journalist with Arts Equator, and an advocate for sustainable dance careers in Singapore and artistic networks in Southeast Asia.

The twins were having lunch. As I sat opposite them, enjoying Mia’s simple but tasty cooking, I noticed how the braces we got for the elder girl had begun to subtly shift her teeth. They told me about what happened in school, before the entire nation of students switched to home-based learning. I listened, and managed to crack a joke about it. They laughed, and I was secretly pleased that they found it funny. I turned my head to look at the Calatheas, Pothoses, Succulents, Begonias, Hoyas and Ferns that decorated our apartment—category names of plants that Mia had now the time to groom, and I the time to learn and appreciate. The TV muttered, I turned and caught a glimpse of the rising number of COVID-19 cases, but my mind quickly drifted to the script of our new play that I had just completed.

Nelson Chia is the co-founder and artistic director of Nine Years Theatre.

Little known perks of staying at home (for the female artist). It might seem funny to use the word perk when talking about this joy of completely working from home but, I love not wearing a bra. I love the feel of my cotton t shirts against bare skin, the gentle flop of flesh, the freedom (oh the freedom) the thrilling rebellion of knowing you are talking to important people on zoom with no underwear on. Because surely there are other things far more improper in a pandemic. The sheer joy of the impropriety. I google videos and articles of other women inhabiting this sisterhood of a braless utopia. Women trepidatiously entering it with Buzzfeed experimental questions like “I went braless for a week to see what would happen”. Nothing happens my friends. The world keeps spinning and a part of you spins with it, gloriously untethered.

Pooja Nansi is a writer, poet and educator whose literary works explore themes of ethnicity, identity and feminism, as well as their intersections. She has published two collections of poetry and was the festival director of the Singapore Writers Festival 2019.

Omar the Magician’s most popular trick was to send people home. Inviting them onstage, he would twirl them like aristocrats at a ball, then, without warning, make them disappear. The volunteers invariably reappeared on a companion’s phone screen, in video-call glory: on their own living room couch, cuppa tea in lap, wearing a what-the-blue-hell-just-happened expression. Scores of people came to see Omar’s act. The running joke was they were cheapskates who did not want to pay cab fare back. One matinee, he plucked the most beautiful girl he had ever seen, from the circle seats. As she vanished forever, a brass hairpin fell out of her chignon, clattering on polished maple floorboards. Teaching him the trick in refugee camp, Madame Lamott had warned of a cumulative price. He stooped to retrieve the pin. Then, in a final miasma of love, exiled himself into a hopeless wisp of smoke.

Clara Chow is the author of two books, Dream Storeys and Modern Myths. Her spirit animal is the sloth. 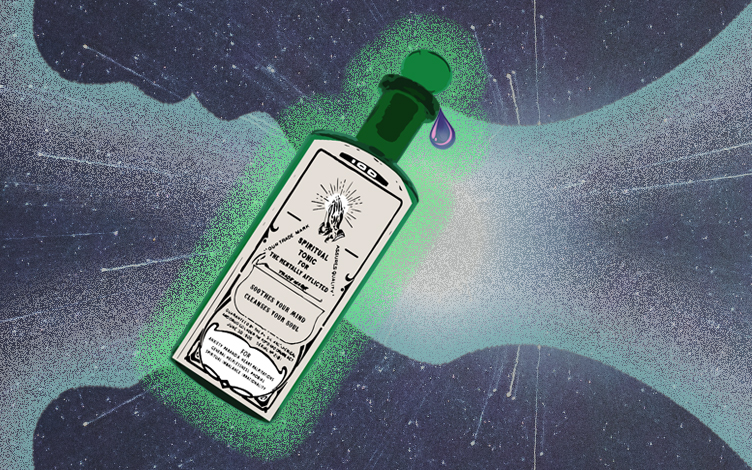