Seven Malay instruments to know and a crossword puzzle.

Discover seven instruments that began life far from the Malay Peninsula (that includes Singapore and Malaysia) but are now integral parts of Malay performing arts traditions. Continue your journey of discovery with an online crossword puzzle and see if you've got all the answers right! A rebana is a term for any single sided frame drum and is believed to have come from the Middle East. There are many different types of rebana. In Singapore, the rebana asli and rebana dikir barat are more commonly used.

Rebana dikir barat comes as an ibu (mother) and anak (child) pair. It is commonly played in dikir barat performances. Dikir barat is a style of Malay choral singing performed as a group. Invented less than 200 years ago by a Frenchman, the harmonium travelled from Europe to India, before it was brought over to Malaya (Singapore and Malaysia). Musicians from this part of the world then adopted the instrument and used it in their music.

The harmonium is a reed instrument and is played by pumping air through the bellows. A reed is a piece of material that vibrates to produce sound. The bellows are the fan-like part of the harmonium. Serunai is a wind instrument made out of wood. The name serunai comes from “shehnai”, an instrument from North India.

This instrument is used to accompany folk performances like wayang kulit Kelantan (Kelantan shadow puppet) and menora, a dance-drama form from Kelantan that is still banned today, as well as silat, a Malay martial arts form. It is also an important instrument to the lives of the Minang people in Malaysia. It is played during celebrations such as weddings or to help them pass the time while working or relaxing.

If you live in Singapore or Malaysia, you would have definitely encountered this instrument. The kompang is a frame drum that is played as part of an ensemble.

A type of rebana, this instrument of Middle Eastern origin was brought to Malaya about 600 years ago by Indian Muslim traders and Arab traders and missionaries.

These days, you will be able to hear the joyous sounds of a kompang ensemble during Malay weddings to announce the arrival of the bride and groom.

This bowed-stringed instrument is one of the melodic instruments used in Mak Yung or Mak Yong (a dance-drama form from Kelantan) and wayang kulit performances. It is believed that the rebab comes from Persia and that the name of the instrument comes from the Persian rabab, a type of musical instrument.

Did you know that locals in Malaysia have a nickname for the rebab? They call it umbang which comes from the word "kumbang". Kumbang is the Malay word for bee. The instrument has earned the nickname because when played, the rebab sounds like bees buzzing. If you ever get to hear the rebab, judge it for yourself.

The angklung is made up of two or four bamboo tubes that is attached to a bamboo frame. Sound is produced when the angklung is swayed from side to side. Each angklung plays only one single note and the instrument is never played solo. It is always part of a bigger ensemble and requires teamwork, which is why angklung ensembles are popular with schools. Do you have an angklung ensemble in school?

The marwas is a small hand-held double sided drum that has Middle Eastern origin. It is struck using one hand. It was brought over to Malaya and neighbouring areas by Muslim missionaries during the 15th century.

You can see these drums in action if you catch a zapin Melayu dance performance, which is an Arabic-influenced dance genre. The drums are an important part of zapin music as it gives the music its Arabic flavour. In zapin music, there are usually four or more marwas musicians. This means that the marwas players have to listen to each other very closely so that they can play a rhythmic pattern that is repeated. It's an exhilarating display of teamwork!

Find out more fascinating trivia about Malay arts by solving the puzzle. Click on the puzzle to read the clues and type your answers in the boxes.

An online season of Malay art, culture and tradition, expressed through the performing arts, from 19 – 28 Jun 2020. 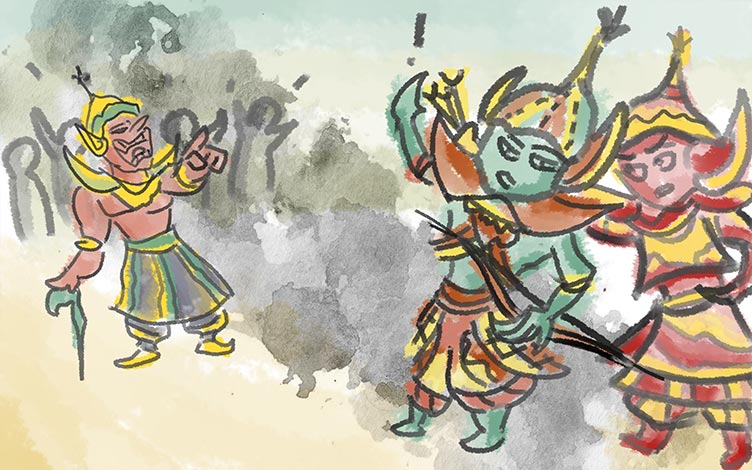