Building a wayang stage, our way

The Chinese Opera stage. Most of us have seen these rickety wooden wonders in Singapore’s neighbourhoods, which may not hold their weight against strong winds. So when the concept of an outdoor wayang stage was first proposed in 2012, to be built by the Marina Bay, the stage was set: we had to customise our own build. This is the story of our six-year-old Chinese Opera stage at Moonfest, the annual celebration of Mid-Autumn Festival at Esplanade.

Groundwork on the sort of quick-and-dirty staging characteristic of street opera took about four months. As the crash course in Chinese Opera and makeshift stages continued well into Hungry Ghost Festival in the 7th month on the Chinese calendar in 2012, the team jumped at the chance to visit several wayang stages hosting different dialect groups all around Singapore to experience first-hand, what it is about the stage that contributes to wayang’s old-world charm.

Right off the bat, street opera stages are terribly understated.

Consider this: for decades, perfomers have entertained on these bare-boned fully functional wooden structures, transported in lorries, erected on stilts on grassy slopes, narrow pavements or uneven muddy fields. They are built in about two days and then torn down in perhaps a day and a half, with or without any PPE (Personal Protective Equipment). To access this structure elevated on wooden stilts, troupe members didn’t have the luxury of staircases, they climbed crude ladders at the front or side of the structure. Plastic Toyogo containers and wooden crates containing costumes, props, instruments and other equipment were painstakingly hauled up and fed through the mouth of the stage by uncles in flip flops.

And then, there is brilliant economical use of the structure and the space within.

Traditionally, there isn't an official backstage area. A heavy backdrop (shou jiu) splits the three-room-HDB space into stage and backstage. The latter transforms into a dressing room, holding area, rehearsal space, smoking lounge, and in its heyday, a provisional kitchen – all of this at the same time. The same wooden beams that hold up the roof function as a truss, on which lights are fastened, microphones are draped and rope pulleys are set up for the basic flybar system. Heavy gongs and cymbals are suspended on the wooden poles in the wings on stage right while costumes on hangers line the beams at the back.

Since the regular opera troupe is pretty self-sufficient, we could have had the troupe drive its entourage to the waterfront carpark and build a stage right where we planned for it to be. But this is Esplanade and as a national arts centre, there were safety guidelines to follow and operational needs to be mindful of.

One of the main concerns was that the stage had to be able to withstand strong winds because of its location by the waterfront. It was also critical that whatever was built embodied the makeshift character of a traditional street opera stage but it had to be more elaborate than your average pop-up wooden wonder at the basketball court opposite the wet market.

Another imperative was providing a space for the performers in which they could feel right at home. We couldn’t impose modern technical theatre standards on these carefree let’s-wing-it arcadian folk just because they were performing in the venue. Our production team found itself designing a stage of paradoxes: traditional yet modern, makeshift but structurally sound.

The stage matters to all of us

Producer Hu Peiyi from Programming was part of the team determined to bring street opera into our venue for reasons beyond creating a sense of nostalgia.

It hit close to home for Peiyi, having grown up watching Chinese street opera performances at the temple that her family frequented. She remembers how these free public performances drew large crowds comprising different races and dialects, and cultivated some intercultural understanding. She elaborates,

Chinese Opera is a culmination of many facets of Chinese performing and visual arts – the music, movement, acting styles, stage theatrics, costumes and make-up. There's meaning in everything that you see.

And then there are the stories that are told. Many impart life values and morals for every generation. Though often fictional, these stories also feature historical figures or mythical legends significant in Chinese culture. Compared to reading, traditional Chinese Opera might be a more accessible way for audiences to learn.

Besides the artists on stage, she mentions that there are many backstage unsung heroes – the craftsmen who sew costumes, draw and paint backdrops, who set up the wooden stages and more. Peiyi notes, "Sadly, because such performances have dwindled and there's no fresh blood in this industry, many of these crafts and skills are likely not passed on."

As Esplanade's Moonfest celebrates and brings focus to Chinese traditional art forms, it was the perfect backdrop for a street opera stage in the Marina Bay.

"The wayang stage embodies all of what Moonfest stands for. Having it at Esplanade provides a central point for different generations, races and religions to converge and make new memories. Hopefully, through the performances on this stage, they'll gain an understanding and appreciation of Chinese arts, culture and perspectives. There were many practical difficulties, but we had to have the stage – in fact, it's more than a stage, and it should matter to all of us." The audience at the Moonfest street opera stage in 2018. Kong Fai Cantonese Wayang performing White Dragon Pass at Moonfest 2018. This is the story of how General Huyan Shouting and his sister Jinding in the Song dynasty escaped the blockade instigated by Bai Long, crown prince of Northern Han. They sought reinforcements and defeated Bai Long.

The street opera stage that you’ve seen at Moonfest in past years is the same one that was first built in 2012. While it is nothing like Baybeats’ massive beast of a Powerhouse stage, this quaint and compact structure with all its bells and whistles—or should we say gongs and cymbals—has a distinctive voice of its own.

Back then, when the idea for this stage first came about, Isis Koh from Production Management immediately reached out to Ah Koon, whose family business is, quite literally, built on the makeshift wooden stages of yesteryear. Ah Koon was closely consulted not only on the technical aspects but also on the tiny details for authenticity and aesthetics. For instance, he suggested using a red and white striped tent as the roof of the stage. He also recommended placing wooden poles around the stage, making it seem like they prop up the stage but they’re just for show. The hemp cloth covering the base of the stage? Also Ah Koon’s advice. Wooden poles propping up this stage, added for aesthetics. Keeping to safety guidelines, the team used a metal brace for the skeleton of the stage, not unlike those used in temporary tentage, in place of wooden poles. The metal bracing is intentionally left exposed so that the performers can continue hanging everything from costumes to flybars on the structure. Four one-tonne blocks anchor the metal structure and keep its rigidity – blow wind, blow. When the whole of backstage is your dressing room, any hanging space could be your wardrobe. Artist and designer Wong Chee Wai sketched and painted the backdrop that decorates the stage. The design was then blown up to scale and stapled onto the wooden flats that make up the wings on stage left and right. Proscenium flats at the front of the stage were taken into consideration as well, and the design included a blank space which allowed the team to update names of sponsors and opera troupes yearly.

In 2018, Wong also designed the interior of Esplanade Annexe Studio, transforming it into the Moonfest Tea Room, a space for free performances and activities related to Chinese traditional arts and culture. View from the wings. The design on the wooden flats by artist Wong Chee Wai features Chinese dragons, which gives the stage a sense of grandeur. The performers on stage are from Sin Yong Hua Heng Teochew Opera Troupe. Sketches of the wooden panels detailing dimensions and placement.

The musicians seated at either side of the stage need to see the actors in order to play so windows were cut out of the wooden flats on both sides. Traditionally, the wu (military) section is seated on stage right while the wen (civil) section occupies stage left. The maestro leads from the percussive section. Stage right, where percussion musicians are seated. Spot the gong suspended from the metal bracing.

Each of the three main genres of wayang in Singapore, Hokkien (fu jian xi), Teochew (chao ju) and Cantonese (yue ju), have specific requirements on stage size, costumes, music and more. The team built a flexible space for opera troupe from any dialect, resulting in a stage that is slightly larger than the traditional wooden one. Opposite the performance venue sits our standard sound and light console, rigged across the waterfront boardwalk to the stage. This is also where we watch for cues to control the Mandarin and English surtitles for each performance. 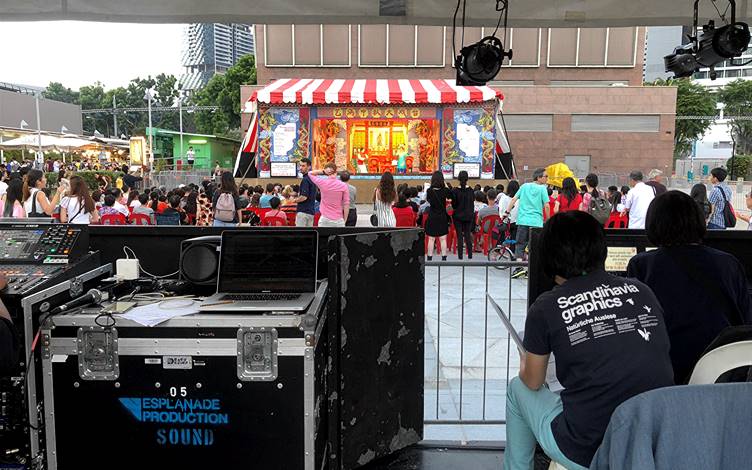 View from the sound and light console. The surtitles flash on the TV screens on both sides of the stage.

Madcap makeshift methods and technical theatre aren't a winning combination from the get-go but this match turned out to be a smashing success. The result is a juxtaposition of old-world charm against the sophistication of a gentrified civic district. For audiences, intended and incidental, the experience is almost surreal and as authentic as it gets to the everyday entertainment back in ah gong's time.

Moonfest is Esplanade’s annual Mid-Autumn festival with a focus on the traditional Chinese arts and culture. Since 2014, the Moonfest Chinese Opera Stage has been an annual offering by the waterfront.