Dancing in the dark: from simple pleasures to a lifelong passion

When I was young, my dad used to sing and dance around the house all the time. We were not well-off, and there were nights when our home would be in pitch darkness because we could not pay our electricity bill. With lit candles everywhere, Dad would sing and prance around to make us laugh. We would sit around in our sweat-soaked clothes, and for a moment, forget about our plight. I'd like to believe that I inherited my optimism and love for performing from my dad. He was quite a remarkable man who was so supportive of my decision to go into the arts.

It's Father’s Day as I’m writing this, and the image of my dad singing, dancing and goofing around is still vivid in my mind.

I got myself some proper dance and vocal training when I became part of the Singapore Armed Forces Music and Drama Company. It ignited my love for musical theatre and got me used to performing in front of big crowds. I also knew that I was good at churning out ideas, and I particularly enjoyed developing them. Choreographing and directing felt like a natural progression.

I guess my first love will always be performing. I signed on with the Music and Drama Company for six years but broke my contract after three. I started freelancing after that and did whatever gigs that came my way. Singing studio covers, dinner and dance emcee work, fashion shows, mascot work and back-up dancing. Lots and lots of dancing in fact, everything from seventh month getai shows to night club podium dancing, to National Day parades. And creating dance steps became easier with all the exposure.

I think my first musical was something I choreographed for a church event. I absolute have no recollection of the name of the church or the title of that production, but it was produced over Christmas, I think.

I was singing a lot during that time too. I came in second in a national singing competition. Shortly after, I was offered the male lead in my first musical, Bugis Street. It was quite an appalling production. Despite being a first-timer in theatre, I knew something was terribly wrong when I had to sing a solo called Stout is Good for You. Yup, you guessed it. Guinness Stout was our sponsor. Haha.

That aside, I got into more theatre work, and because I was already doing choreography, I took on jobs for that as well. The first full-length musical I choreographed was Forbidden City – Portrait of an Empress back in 2002 for the opening festival of Esplanade. I was still in Europe and under contract for Elton John’s production of Aida (2002). Luckily, I had enough leave to come back to Singapore and created the choreography in two very stressful weeks.

Musical theatre is a strange creature. It is a world of heightened behaviour and reality, where actors burst into song and dance when they can’t contain their emotions any longer. This calls for performers to deliver the story with an equally heightened sense of truth and passion. So good acting, spoken or sung, can carry a musical to greatness. A good musical also tells a clear and rich story. For that to happen, the script and pacing is crucial.

The creation story: strengthening the narrative through song and dance

I do a lot of research prior to rehearsals. It’s a big part of my process whether I’m a director, actor or choreographer. I create a folder and fill it up with everything that helps me see the bigger picture.

I always ask for the music of the show. The first thing I do is listen to the music. It’s on my playlist and I listen to it everywhere I go: at the gym, when I walk the dog, when I wake up in the morning. I soak in the music.

I listen to it for two things. Firstly, the imagery and colour. As a choreographer, it is my responsibility to understand the context of the song in the story and keep telling the story of that number. I don’t see the steps at this early stage but I work towards knowing what the number is going to be. Secondly, I want to get a good sense of the musicality, to feel the energy that matches the rhythm and the accents, and to know what to hit and what to not give focus to.

Then I forget about it for a whole day or two and come back to repeat the process, then see what hits me, and what is different and new. This can go on for two weeks before I start colouring this black and white outline with dance steps.

Humour and irony greatly influence my work. I love to infuse my choreography with humour. Maybe that is the part of me that sees the laughter even in the most morbid situation. And the people I work with inspire me when I choreograph. Hard work and an open mind always does.

I was brought up in a predominantly Chinese environment, and have always loved the Chinese language. Theatre companies like Theatre Practice and Nine Years Theatre have been churning out some important work in the last decade, and there has been a significant swell in Mandarin musical theater-goers. I sense this trend will continue to evolve and we can expect some interesting work.

Choreography is much harder than directing and acting. I take on no more than three productions a year. It’s draining.

I choreographed and co-directed Theatre Practice’s Liao Zhai Rocks! (2016) last year and went almost immediately into staging and directing Sing Theatre’s Jacque Brel is Alive and Well and Living in Paris (2016). I really enjoyed both experiences because I had so much freedom in the creative process. Playing the dual roles of director and choreographer means that I can start rehearsals with a clear story in my head, as well as craft the choreography to further tell that story. It is what I most enjoy.

I just finished directing the stage version of The Noose (2017) for Mediacorp at the Star Theatre, and am into my second week of rehearsals for The Great Wall (2017). I love jumping back into the skin of an actor! I’ll be taking opera voice lessons soon for an original work staged in Hong Kong in the last quarter of the year. I was talking to a few theatre friends last night about how complacent the scene has become. When performers can say, “You cast me in this show so you know my limitations,” or “I'm not a dancer so I'm never going to look good doing those steps,” this sense of entitlement irks me big time.

I think a lot of musical theatre performers here don't try hard enough. There is not enough competition to drive and push them. When I was working in the Netherlands, everyone was constantly taking classes. I was often the most technically lacking member of the cast. I didn't even know the dance terms they were using when we were taught our steps.

So what do you do? You can’t complain because there are 20 reserve cast members waiting like vultures to take over your part.

You work doubly hard; you read and research as much as you can; you observe everything and learn; you go into rehearsals an hour earlier to do your own warm-up exercises and revisions; and you make sure you are off-book at your first rehearsal. You never ever mark your steps and you dance like it’s your last show at every performance. You try to be good at your job as much as possible.

It was not easy coming back to Singapore to work on productions that have little funding and budget. The set for a single scene in some of the European productions can cost more than the entire production set budget here. But I’m also reminded of a quote by director/choreographer Bob Fosse, “A black box with a few shafts of light and an imagination is all you need to make magic”. And crafting some of the smaller budget music revues like French Kiss in Singapore and Jacque Brel is Alive and Well and Living in Paris has been most satisfying for me.

I am still learning from my experiences, and I’m never entirely happy with what I put on stage. I’m not the type to keep looking for taller walls to scale, but I do want to spend a few months working on my stamina and body. I want to feel like I’m 30 again! Okay, that’s a GREAT wall.

With over 20 years of experience in the performing arts, George dons many hats as director, choreographer, actor, singer and artistic director. As a choreographer, he has worked on many musical theatre productions and revues, including Forbidden City – Portrait of an Empress (2002), Liao Zhai Rocks! (2010), Into The Woods (2011), Lao Jiu: The Musical (2012) and A Singaporean in Paris (2014), among others.

As told to Lim Liting in Jun 2017. Minor edits have been made for clarity. The views and opinions expressed here do not reflect the official standing or position of The Esplanade Co Ltd. 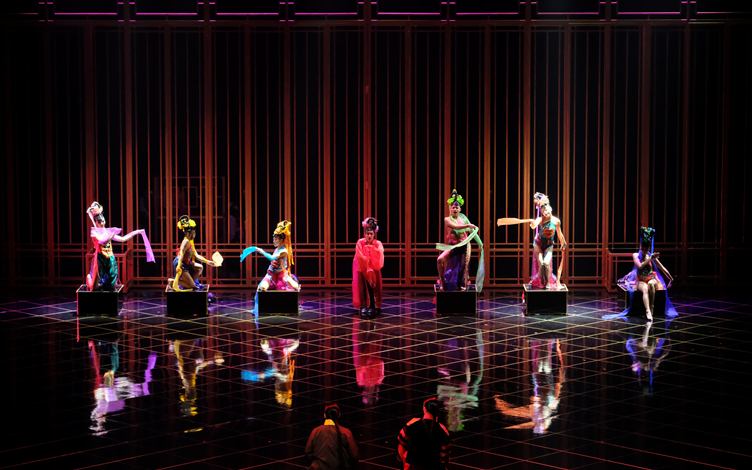