I believe that we human beings can’t live without nature. Deep down inside our existence is always part of nature, we need nature. There is a universal language which is understood by everyone. Why is it an emotional experience for us when walking under the trees, seeing the birds fly, hearing the whisper of wind, staring at the ceaseless waves, or watching a tiny shining drop of dew on the tip of small leaves….? Those feelings have nothing to do with our level of education or how much money we have in the bank. I just want to keep the connections that define our existence. We are not complete without it…

Traditional cultural expression in Southeast Asia is distinctive for its cross-disciplinary ethos. Dance, poetry, music and graphic arts have a long history of intersection in popular and court art throughout the region, as does the mixing of the sacred and the profane. In the 21st century, after many decades of imported art school orthodoxy imposing strict divisions between media and disciplines, regional practitioners are now breaking free and crossing back and forth comfortably between one and the other, media and genre, without inhibitions.

Jogjakarta-based architect Eko Prawoto is one such liberated creator, his visual art and architectural practices meshing into a single and particularly refined expression. He has devoted his over three-decade-long career to a practice that is environmentally aware and advocates sustainable building materials, the use of indigenous construction techniques, and community cooperation.

In 2012, for Esplanade, Prawoto conceptualised Garbha, a site-specific structural installation that he built exclusively from bamboo in the curved Jendela space. Put up in a couple of days by Prawoto, his family and several villagers with their families and neighbours, Garbha, which translates as ‘womb’ in Sanskrit, was a woven, light-admitting shell that could be experienced both from inside and outside its form. Toying with concepts of inclusion and exclusion, and protection versus contents, the piece was both immediately sensual in its occupation of the space and intervention in audience’s perception of the gallery, and philosophical in reach.

The work communicated a number of ideas via its form and ideological references. Through its visual and spatial language as well as its down-to-earth bamboo medium, familiar to all citizens of the region, it evoked universally familiar rural Southeast Asia. Through its community-involving fabrication and its metaphysical subtext of insider-outsider balance, Garbha touched a chord in audiences who lingered and entered, either briefly or for longer periods, meditating in the light-filtering bamboo cocoon. Further, though shying away quite deliberately from religious iconography or forms of any kind, the work, through its title and atmosphere, saluted the sacred nature of life, birth, and nature, with Woman as the giver of life also referenced.

In the second quarter of 2010, Prawoto presented three bodies of work at Esplanade. Tapestry was a three-dimensional bamboo installation that occupied the border area between sculpture and construction. Displayed hanging from the rafters in the Concourse area – smaller, formally-related pieces were suspended in the Skylight Cones behind — Tapestry recalled weaving in technique and appearance as it trailed sensually over the entrance hall’s wide staircase.

As a simply structured, abstract piece of art commissioned in the context of Esplanade’s annual A Tapestry of Sacred Music festival, the work referenced the austere and sometimes ephemeral architecture of Southeast Asia’s rural backwaters.

In its allusion to loomed cloth, one of Southeast Asia’s most significant repositories of pre-modern and colonial-era material culture, the nearly 20 narrow, floor-sweeping pieces also conjured the spiritual aspect of ancient regional ritual practices as represented tangibly by ikat, songket and the like. In doing so, Tapestry also called attention to the questionable nature of the distinction drawn between fine art and other visually expressive, locally-produced media.

The Temple was another new work, erected outdoors in the bay-front area. Inviting the public inside, it functioned as an urban shelter, dwelling-scaled sculpture, and zone of spiritual possibility. Built exclusively of bamboo by Javanese artists, it combined the strength and simplicity of roughly-made vernacular architecture, and the aesthetic refinement of Prawoto’s artistic sensibility. The Temple drew crowds by the thousands, showing visitors how contemporary Southeast Asian architecture can harness local materials and indigenous skills to produce buildings that, without resorting to nostalgia, tap into Southeast Asia’s long and rich history as a global centre of architectural excellence.

Finally, Prawoto’s drawings, illustrating all manor and origin of houses of faith, were put up on the Community Wall. Making up the exhibition Sacred Exchange, the small works on paper were classical and descriptive in style, produced over more than two decades. The sketches told of Prawoto’s travels as well as his ongoing fascination with the sacred and places of human assembly. Churches, temples, shrines and mosques all figure in the series, confirming the wide-ranging humanism that underpins the artist/architect’s vision.

Bamboo is an old material from our Asian tradition. Since we only think of bamboo in that context, it is negatively stigmatised as being non-modern, low-tech, outdated, etc… Bamboo is now being brought back onstage by foreign architects. As these architects have no traditional connection to bamboo, they are free to give meaning to bamboo as a building material. Armed with scientific knowledge, they are able to appreciate the positive mechanical properties of bamboo. Now, the creative possibilities and architectural language concerning bamboo are growing. We are supposed to learn again about bamboo... 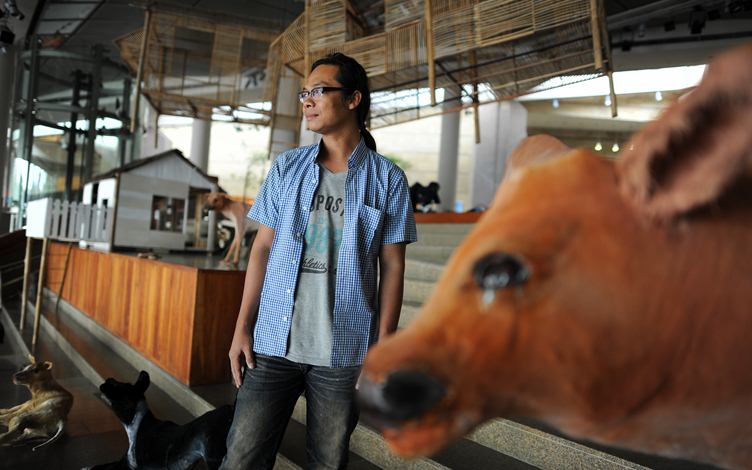 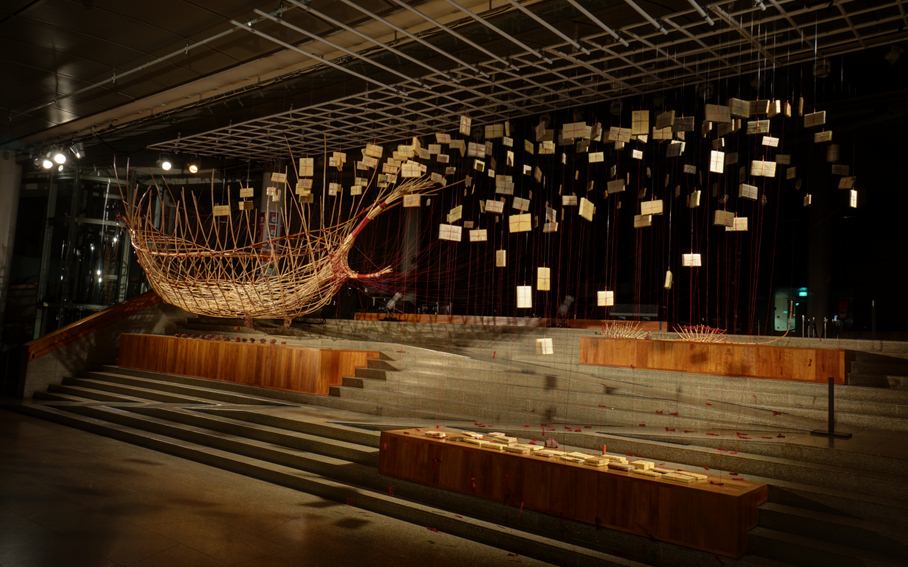