An oral tradition growing into the 21st century.

First, it begins with an imperceptible "eee" for a hum: steady, almost drone-like and next to silent in its focused intensity.

And then, barely noticeable—an indefinite pitch lower, another hum "ohh" follows, moving forwards in time in parallel motion with the first hum. Seconds later a third "aaa", even lower than the "ohhh" enters, joining the first two vocalisations in close-harmonic following of lines—although harmony would be less than an ideal word for the ensuing shimmering sonic texture. At this point in time our ears are still cocked; we were relishing the quietness of it all.

But the two singers to start the first utterance, huddled in an inward-facing circle of twelve or so others, begin another ‘eee’ at a higher pitch as the rest of the small choir maintain their last notes, only to consecutively break and join with subsequent "ohhs" and "aaas". Thus a cascade of sound is slowly built up, step by step, in ascending pitch and volume.

The song circle sustains and pushes towards a slow climax of a vibrant aural halo, wrapping itself around the ears of all present in the performance space.

Welcome to the pasibutbut—or a millet-growing song ceremony, traditionally performed at the start of spring in open rice fields by the Bunun people of Taiwan.

As one might imagine, the creeping sonic crescendo makes symbolic representation and ritual encouragement of rice seedlings sprouting and reaching towards the sun.

The singers we hear today have in times past been (and by and large, are also presently) the guardians of these fields; farmers willing their crops to grow, flourish and yield a good harvest.

At Esplanade – Theatres on the Bay, where the Bunun Mountain Traditional Music Chorus performed in 2014, we hear the pasibutbut performed in the man-made silence of a high-spectacle urban stage in Singapore. The musical ritual is decontextualised of its connections to nature and agriculture but no less powerful in its rendering. Recreated by the Chorus hailing from Wulu village, Taitung, we also hear other song and ritual genres that hark at the currently transforming hunter-agrarian lifestyles of Taiwan’s aborigines. The group returned to Esplanade for A Tapestry of Sacred Music on 20 and 21 April 2019. Guardians of the fields, chorus of the indigenous people

An oral tradition, a way of life

The Bunun Mountain Traditional Music Chorus, which was officially formed in 1986 under advisement of Taiwan’s first Bunun priest Vilion Lee, is a stalwart of Taiwan’s developing indigenous music scene. It offers vocal presentations of repertoire learnt through oral tradition across generations and sung as part of everyday, work and ritual activity in the hilly hot-spring surrounds of Wulu in Eastern Taiwan.

Some songs make direct as well as metaphoric references to farming and hunting activity using work-based rhythms or gestures. Other songs are prayers for a bountiful harvest or for rain. Some songs are shout songs, featuring exhortations by elders to younger generations in call-and-response settings. Other songs are communal choruses of bonding and celebration.

Collectively, these songs refer to a way of life in Taiwan among indigenous peoples—the first Austronesian residents of the island before the larger-scale immigration of Han Chinese in the 16th century—that is fast transforming today.

Members of the Bunun Traditional Mountain Music Chorus hail from one of many Bunun villages scattered along the east coast of Taiwan, nestled in the foothills of the Central Mountain Range. In turn, the Bunun make up one of 16 officially recognised indigenous groups on the island, whose total population of aborigines constitute about 800,000 or three per cent of Taiwan’s total population.

Remaking "authenticity" in the mountains and cities

Strikingly, the Chorus makes claims of presenting "authentic" performances of indigeneity and Bunun life. Increasingly, however, the term "authentic performance" itself has come to be contested.

This is because the ways of life of indigenous peoples in Taiwan have been morphing steadily through history, and have ever more so been changing in the wake of not only global and domestic developments in industrialisation, but also rapid technologisation. Recent transformations in the digital media world have also led to the steady recalibration of indigenous livelihoods, lifestyles and culture production.

Even the once-innocent term of "mountain" in the very name of this vocal ensemble has become contested territory as political-correct terminology on how to label the first pre-Han settlers in Taiwan has changed.

Today the state-endorsed and self-identifying label is "indigenous". To an extent this term is replacing that of "aboriginal" of the more recent past and, earlier, the negatively-connotated "mountain peoples" and "barbarian tribes" (in translation from the Japanese banzoku when Taiwan was a colony from 1895 – 1945).

In the so-called "mountain villages" themselves—Japanese round-grained rice has replaced millet farming with hunting restricted to seasonal and state-licensed stints in carefully delineated territories, even as Facebook and fully-flushing toilets in airconditioned ‘traditional’ homes with beautifully-tiled "outhouses" are par for the course.

So—where does the "authenticity" lie in these changing times? An alternative word—memory—might be a useful stand-in for many indigenous groups.

As with many minority groups around the world, indigenous peoples in Taiwan often end up showcasing their potentially exoticised rituals on tourist stages, and find themselves delving into the performing arts for economic sustenance and, more crucially, reclaiming of the past for themselves in new ways and new identities.

In the case of the Bunun Mountain Traditional Chorus, the ‘authentic’ songs are not so much ‘authentic’ to a lost time, than "authentic" to the group’s current balancing act of keeping alive, in contemporary and sustainable ways, vocal genres whose contexts of existence have since been lost.

For one, the intervention of the church—seen in musical and educational encouragement of the chorus’ community advisor of pastor Vilion Lee—has already substantially reframed "tradition" for better or worse.

This has been achieved through the incorporation of new theologies into Bunun pre-colonial cosmologies enacted in rituals and songs, in parallel with the introduction of new song texts and performing styles.

And the Bunun are not the only group in Han-dominated Taiwan to have actively embraced Christianity. Many other sister groups from the Amis to the Paiwan have converted to Catholicism, in acts of both political rebalancing in the face of Tao-Buddhist dominance, and in allowing the church to platform its proselytising efforts through community-building and education campaigns.

Indeed, this researcher’s own experiences with Amis singers in Taitung have revealed the church to complement indigenous needs through the documentation and preservation of orally-passed down songs in the transformed cipher notation of hymnals.

The church has also provided stable platforms and new contexts for community music groups to congregate, sing and rehearse. Members of the Bunun Traditional Mountain Music Chorus hail from one of many Bunun villages scattered along the east coast of Taiwan, nestled in the foothills of the Central Mountain Range.

From international collaborations to transnational activism

Elsewhere, other indigenous song groups in Taiwan have embraced karaoke, cultural troupes in aboriginal theme parks, stage performances and pop music as parallel creative outlets for the diversified sustaining of their song cultures.

In the case of tourist park musicians, this can sometimes be a financial balancing act, as this researcher’s own interviews with such figures have shown: the stability of a day job selling souped-up and exoticised "inauthentic" fare to tourists paradoxically allows singers to retain a different kind of professional existence in their livelihoods as singers, and maintain their own dying vocal traditions for themselves in parallel, otherwise economically unsustainable zones.

But made-for-tourist performances of indigenous music are not the only showcases. In the examples of media-friendly, hip and technologised pop artists such as Amis singer Suming and Bunun performer Biung, pop music careers feed into new waves of Taiwan aboriginal nationalism and wider transnational social activist movements carried out on behalf of indigenous communities. The Bunun Mountain Traditional Music Chorus is a semi-professional singing group and a stalwart of Taiwan’s developing indigenous music scene.

In the Bunun Mountain Traditional Chorus’ latest musical offering at the Esplanade, the weaving in of the cello here—instrumental shorthand for Western art music now troped as "international" or often, erroneously, as "universal"—is another case in point for the exploration of different creative outlets in the developing of cultural sustainability. At times, the cello—performed by Annie Chang—plays easy solo melodies paraphrasing the vocal lines; at other times it riffs off the rich polyphonic textures closely associated with the Bunun people in a style commonly-referred to in Mandarin as Ba Bu He Yin (Eight-Part Harmony—though technically individual parts rarely reach eight in number).

Such collaborations are not new; from the same Bunun enclave another vocal group known as the Wulu Bunun—of which most members also overlap with the current Bunun Mountain Traditional Chorus—have worked with American cellist David Darling to release recordings of gently-lolling, hymn-like "authentic" tunes with string accompaniment, if not string counterpoint. And counterpoint, indeed, is perhaps the metaphor for these new constructions of the "traditional" and "authentic", even as "tradition" and "authenticity" have always been changing over time, and continue to change.

As a semi-professional singing group, the Bunun Mountain Traditional Chorus holds a history long and illustrious enough to include several national awards and regular invitations to perform at music festivals within Taiwan and overseas.

Their appearances on prestigious stages beyond their native island’s shores mark not so much a coming of age or even a claiming of space on international stages and playing fields, than how the work of "traditional" singers have become instrumentalised in new ways: as cultural diplomatic efforts made in the name of global indigenous movements, and also as demonstrations of Taiwan’s soft power in eras of shifting political tectonic plates. 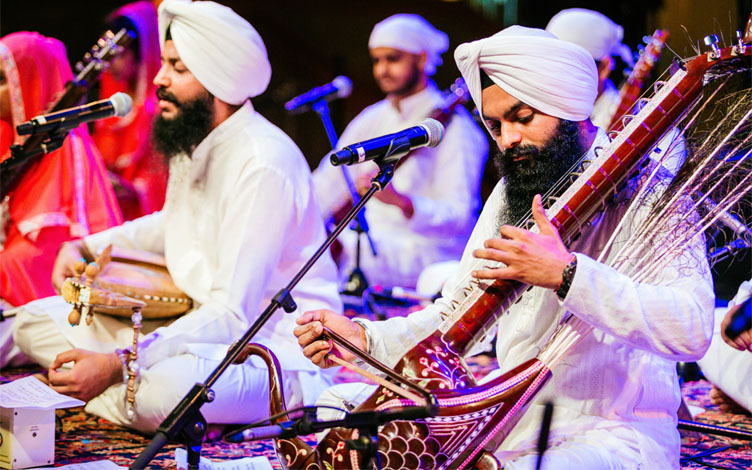 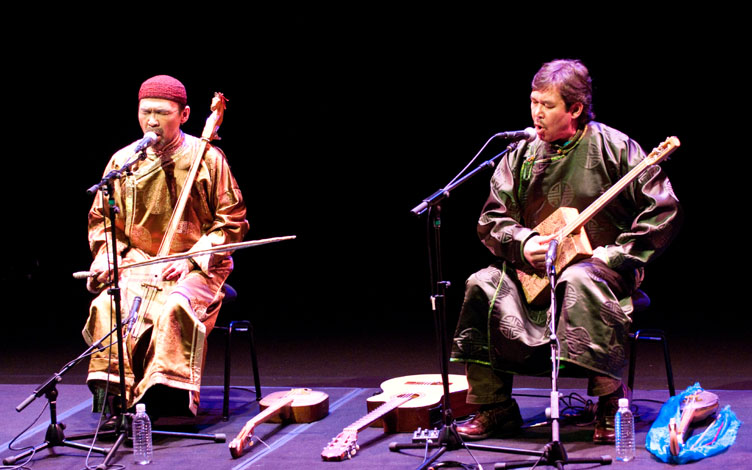