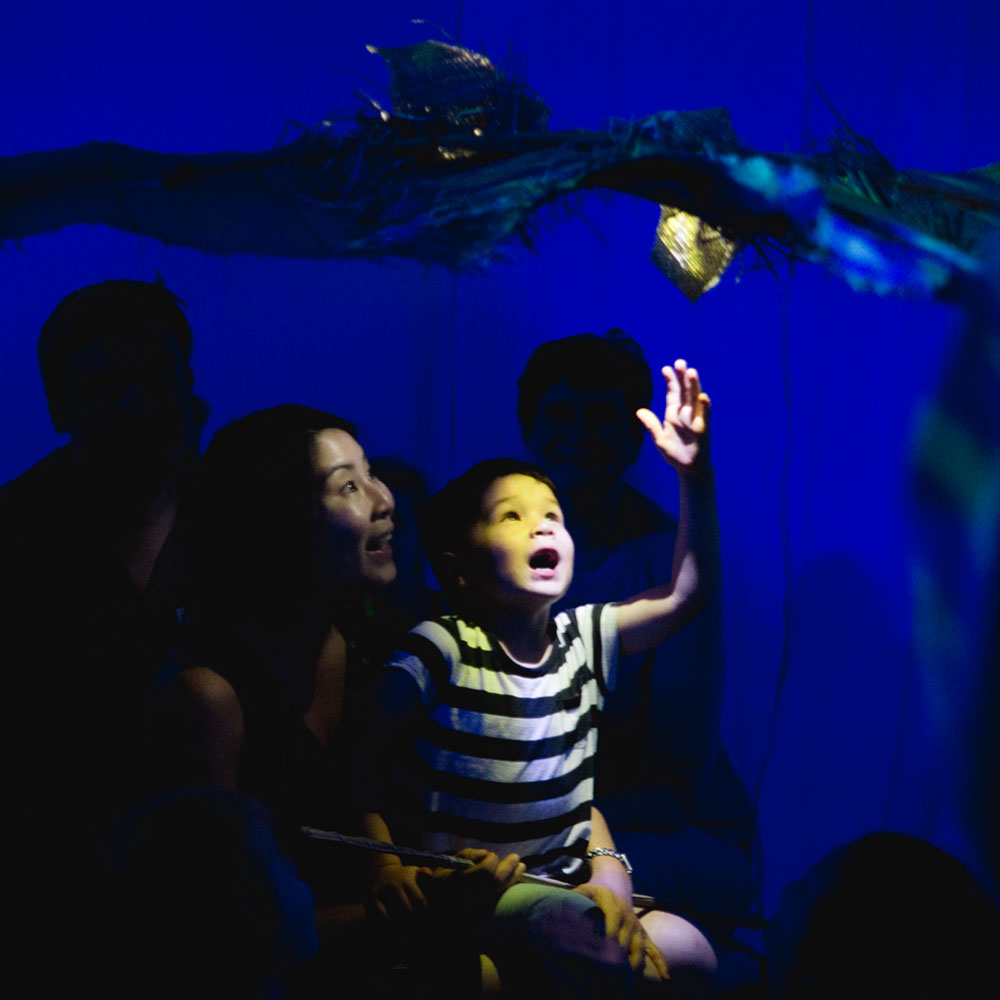 Set sail on the family adventure of your choice

A boy goes on a perilous sea voyage with his aunt, encounters danger along the way, and eventually arrives in a welcoming new land.

The premise of Cerita Anak (Child’s Story), a wordless immersive theatre piece for children, may sound simple – but the production allows you to choose, literally, your place in it. Parent-child pairs could either be “passengers”, seated in a boat and fully part of the performance, or opt to be “villagers” seated in an outer, more conventional, theatre setting. Villager tickets, which are sold individually and for all ages, allow for a more meditative view.

“Having both perspectives in the work makes the work so much stronger and more powerful,” says its co-creator Sue Giles of Australia’s Polyglot Theatre. On the one hand, it places adult/child pairs in situations which evoke feelings of adventure, as well as awareness of human and political issues. This allows them to empathise with those people in our world who are facing real dangers. On the other hand, the villagers, by observing the action, can perceive the big picture more clearly.

This “enables conversation” that goes further than asking the child ‘which was your favourite part?’, says Giles, who worked with her good friend Maria (Ria) Tri Sulistyani of Indonesia’s Papermoon Puppet Theatre to conceive and develop the show—alongside designer Anna Tregloan, composer Steph O’Hara and puppet maker Anton Fajri. Boats and the themes of immigration and sacrifice drive Cerita Anak. Photo by Theresa Harrison.

The co-creators were inspired by the communities they worked with.

“Ria had a burning desire to work with the children in Lasem in Java,” explains Giles. “[During] World War II, the community had taken action against invasion, by sinking all their boats and destroying their shipbuilding industry so it couldn’t be used against them.”

This historical example of community action and sacrifice led them to the idea of sacrifice in general: what a parent will do to ensure the safety of their children.

“We loved the idea of setting an adventure on a boat because we were coming from two island nations, and also nations where immigration has shaped their cultures,” she adds.

The Lasem story is woven throughout the performance, through images, songs and sounds. In one "underwater" scene, audience members get to play with a hundred "sunken" paper boats. At the core of the production is the creators’ belief that humans care for their offspring and will do everything they can to protect them. It touches on the plight of refugees and asylum-seekers, sending the message that there are real people who are vulnerable and facing this situation every day. Audiences at Cerita Anak (Child’s Story) swing between joyful fun and apprehension.

Nevertheless, the tone is one of optimism, and reviews have raved about the magical experience. “We wanted the work to have hope and the vision of a friendlier, more compassionate world, instead of the more common refugee experience,” says Giles. Cerita Anak is a powerful sensory experience for kids. Photo by Theresa Harrison.

The show’s immersive set-up lets children engage directly through their senses, to contribute to the action. “It’s pretty powerful stuff,” says Giles. “Being in the middle of things is the natural place for many children.”

Even watching from the outside, children connect with others through facial expressions and emotions. “Sharing space with others creates enormous energy,” says Giles. “Live theatre provides a strong feeling in a ritual space.”

Every day, 37,000 people are forced to flee their homes, according to the United Nations—25 people per minute, in 2018. That is a terrifying number, says cast member Emily Tomlins.

Every child should have safety, comfort and a space to express themselves imaginatively as children... The beauty of this production is that it works on two levels. The children get to play and explore. The parents… can have an understanding of the refugee’s journey, an understanding that becomes deeper as they help guide their child through their own journey.

Cerita Anak (Child’s Story) was presented at the Esplanade Theatre Studio from 4 – 6 Oct 2019 as part of Octoburst! – A Children's Festival

Clara Chow is the author of the short story collections Dream Storeys (Ethos, 2016) and Modern Myths (Math Paper Press, 2018). She is working on a Chinese poetry collection.