Six types of puppetry for the young at heart

Puppets have been a source of wonder and delight for children and adults since time immemorial. Made out of materials such as wood, cloth and leather, these figures can be operated, lit and turned into theatre in ingenious ways. Here are six different types of puppetry to check out.

Metal rods, attached to the head, limbs and other moving parts of the puppet, are operated from below by the performer. Rod puppets are used in many Asian theatre traditions, and contemporary puppeteers around the world often combine hand and rod techniques.

Fun fact: How many puppeteers does it take to bring a rod puppet to life? Well, it depends!

In Japanese bunraku, a form of rod puppetry, three people animate one large puppet—and the stage set-up does not conceal the puppeteers. You can see one puppeteer controlling the puppet’s head and right hand, another controlling the left hand, and the third operating the feet and legs. However, with smaller rod puppets like the ones in Kopitiam by Five Stones Theatre, it takes one puppeteer to handle one puppet. Unlike bunraku, the solo puppeteer is tasked with manipulating all of the puppet's moving parts. 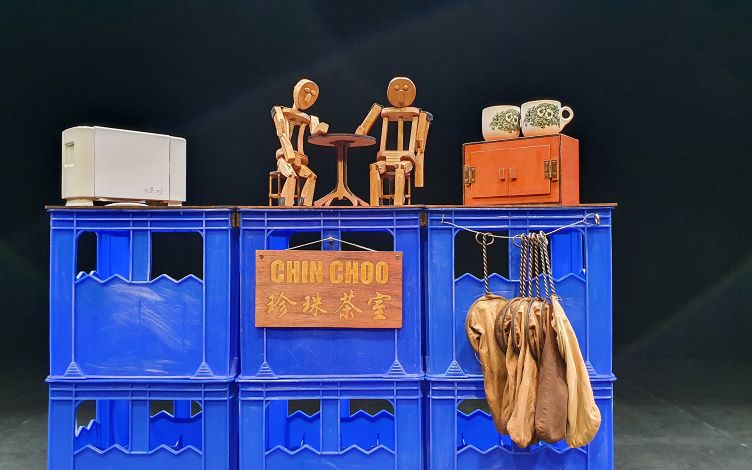 Rod puppets in Kopitiam. Each puppet has its own puppeteer.

These are puppets with thin cords fixed to various points on their bodies, controlled from above by the puppeteer. They can be found all over the world. For example, the pantin, a traditional French puppet, has a single cord at the bottom that when pulled, causes the arms and legs to fly up.

Fun fact: Despite being controlled by close to two dozen strings, nifty Burmese marionettes can perform somersaults without strangling themselves!

See how the crowd took control of a giant marionette and became a puppeteer at String Symphony, a free installation and activity by Spare Parts Puppet Theatre from Australia. String Symphony was a part of Flipside 2018.

Which young child is not fascinated by his shadow? Shadow puppets play on that fascination—flat cut-out figures are lit up against a translucent screen, while the audience on the other side watches the shadows created. This form of theatre exists in many cultures, the example closest to home being Indonesia’s wayang kulit.

These days, shadow puppetry goes beyond the traditional. In Millefeuilles by Compagnie Areski, creator Lukasz Areski combines pop-up book techniques, kirigami, the Japanese art of cutting and folding paper and shadow theatre to create an experience comprising an art installation and performance. Audiences are also invited to participate and create their own stories by transforming immobile silhouettes into animated shadows with flashlights.

Fun fact: You and your child can create your own shadow puppets! Use your hands and fingers to create the shapes of animals—say, a butterfly, or a rabbit—and shine a light so that these shadows are cast against a bare wall.

One hand—or in some cases the entire arm—occupies the inside of the puppet and manipulates it. The beloved American puppeteer Jim Henson used this technique to animate the faces and heads of most of his Muppets, such as Kermit the Frog.

Fun fact: In Korean baltal plays, the puppets are controlled using the feet instead of hands! The puppeteers lie on the ground with their puppet-wearing feet up in the air.

In Dans l’Atelier & Chantier Frigolite, a production that was a part of Flipside 2018, Belgium's award-winning Tof Théâtre, founded by master puppeteer Alain Moreau, gets creative with this approach and lets the audience see how the puppeteer manipulates the puppet. The puppet in this performance comes alive and takes over its own construction!

Puppets, painted or dressed in fluorescent materials, are illuminated using ultra-violet lighting. The rest of the stage is completely dark and puppeteers are dressed all in black, so that the audience only sees the glowing puppets. An example of black light theatre is Rainbow Fish, performed by the Mermaid Theatre of Nova Scotia.

Think puppets can’t perform on water? They can in Vietnam, where the surfaces of ponds and paddy fields serve as the stage. The puppeteers, standing in waist- or knee-deep water, are hidden behind a curtain. This traditional form dates back to the 12th century—villagers entertained themselves with water puppets when the rice fields were flooded.

Fun fact: Not only does the water help to hide the rod and strings of the puppets, it also creates theatrical effects such as waves and splashes. Sticks and strings will make my bones From Muppets to Puppets