If you’re a fan of local indie, you might have noticed greater visibility for musicians of the genre this year. This may be surprising, given the harsh climate the pandemic has created for the music industry at large.

It hasn’t been easy—just ask any local artist. For independent pop-rock singer-songwriter RENE, one major struggle has been simply garnering the morale to continue making music. Releasing her debut EP during the pandemic was no easy feat, she reveals. “I couldn’t go into the studio, so a lot of the production had to be done remotely. How was I going to launch my EP if physical shows weren’t an option?” Guitarist and owner of indie label Where Are The Fruits? Tan Peng Sing explains that it isn’t financially viable to organise shows with reduced capacities. “It has been a serious blow to artists in Singapore because while we remain stuck, the rest of the industry globally is moving on,” he says.

But as the old adage goes, every cloud has a silver lining. Amidst the grey fog of a two-year long pandemic, the spotlight has shone brightly on Singapore’s indie alternative music scene.

With travel restrictions only beginning to relax, bringing regional and global acts into Singapore remains a challenge. But instead of downscaling events or relying on pre-recorded performances by overseas artists, institutions have taken the opportunity to turn the spotlight on local artists. Just last month, Baybeats—Singapore’s largest free alternative music festival—introduced a line-up of solely homegrown live acts. In September, Mediacorp launched indiego, an online radio station featuring alternative music in Singapore. With rising platforms for local musicians, this year has bred a delightful discovery ground for homegrown talent.

The joy lies simply in the process of making music and writing whatever makes me happy.

Artists have also been pushed in new directions. For one, Peng Sing observes a greater openness for collaboration amongst many of the artists he manages. “Everyone is feeling stuck, so we’re just trying new things”, he says. To cope, RENE reminds herself of the reason she does this in the first place. “The joy lies simply in the process of making music and writing whatever makes me happy,” she ruminates.

All in all, there has been a shift in focus from global acts to a greater appreciation of our local indie scene that will make local indie fans rejoice. And perhaps even on a wider national scale, slowly but surely, we can hope to wash away the phenomenon of cultural cringe towards local music. To celebrate these exciting times, we’ve selected 20 prolific local indie acts that have invigorated us this year, many with new and upcoming releases to look forward to.

For the ones with that groove

Whether its lyrical bars and tight flows or chill beats with soulful melodies, you have that groove embedded deep in your soul.

If not for his bilingual bars in English and Malay, you would recognize him for his iconic kain pelikat. ABANGSAPAU is a 22-year-old Malay-Sikh hip hop artist whose songs tell a story, every lyric channelling something distinctively raw and tender beneath his flow. hahaha, his latest single, centers on a young, wide-eyed boy’s journey into a ruthless industry.

Rapper and singer Tengyboy has an immaculate sense of rhythm and rhyme. Reminiscent of Post Malone and Mac Miller’s effortlessly laid-back rapping style, he is also a frequent collaborator and is featured in recent single Hit My Line produced by Homeground Studios alongside Malaysian musician NYK.

KEYANA performing at Baybeats 2021 in the Annexe Studio.

KEYANA performing at Baybeats 2021 in the Annexe Studio.

At just 18 years of age, KEYANA is already a sensation in the entertainment industry. The multifaceted singer-songwriter is also a professional model and dancer-choreographer, and her lilting vocals evoke the likes of Kehlani, Summer Walker and Inayah. Her latest single, Afterglow, is a reflection of personal growth and identity.

Meet the cool kids on the block. Rap trio MHC comprises daniKIDDO, mickeyLEANO and omarKENOBI, and are no strangers to the scene with their infectious blend of old-school ‘80s hip hop and lyrical wordplay. All three members have been active both together and separately—Dani made an appearance at BGourd’s Baybeats 2021 set, Omar DJs a weekly show on indiego and Miki recently released a new single, Muse. Get nostalgic with their classic tracks like Lose Your Love and W a N N a B E S, or dive into their more recent eponymous mixtape.

No, it's not just a phase. You’re a rocker through and through that loves to headbang your heart out to hard hitters.

Even through several band member changes, Caracal remains a powerful force. The post-hardcore mainstay continues to impress with dissonant guitar melodies, tight drum arrangements and vocal prowess. Fans can look forward to new material soon, but meanwhile feast your ears on Manicenigmatic, the lead single from their 2018 EP Take It Apart And Put It Back Together.

Seavision is a five-man metalcore band making waves in the music scene with their rage-filled choruses and edgy vocal chops. Think Like Moth to Flames, Wage War, The Devil Wears Prada and Memphis May Fire. Check out their latest release: A crushing take on everyone’s favourite emo anthem, My Chemical Romance’s Helena.

Terrestrea never fails to mesmerise with a spectrum of rich soundscapes. Contrasting hard-hitting riffs with softer introspective elements, they’re one of the most versatile alternative/post-hardcore bands around. Headbang to their latest track, 12 Rounds.

This band is Singapore’s best kept secret. Their spirited guitar work fuses harmoniously with fuzzy vocals, musing upon the harsh realities of life with a sound reminiscent of everyone’s favourite midwest emo groups. Home, In A Way is their latest eight-track album just released earlier this year.

For the softbois and gurls

Shoegaze, dream pop, and everything in between

Like the shoegaze cliche, perhaps you often hang your head low—finding comfort in introversion and beauty in fuzzy guitar loops.

It’s hard to pigeonhole Subsonic Eye—the band pride themselves on weaving through different genres and constantly reinventing themselves. The one thing that’s constant is their brand of misty, sonic bliss and effortless music-making. In the span of just two years, they have released two EPs and a third full-length album, Nature of Things.

You might recognise her as the frontwoman of local indie band Sobs, but now, Celine Autumn is introducing her sweet, manic alter ego to the world. As Cayenne, she concocts a marvelous mayhem of synth lines and digital distortion in this solo project. Her latest four-track EP will send you into a state of electro hyperpop euphoria.

Quirky and unassuming, indie math-rock outfit Woes don’t take themselves too seriously. With an extensive background in jazz, the band cook up a fun yet sophisticated blend of math and emo. Their recent EP Wake Up Pls will awaken anyone from a slumber.

Comprising Weish and Din, this stalwart duo is a must-know for lovers of indie electronic. What started out as the pair’s passion project has blossomed into one of the most prolific duos in Singapore’s indie scene. In November 2021, .gif announced their new film, Hail Nothing (Live At Snakeweed)—a presentation of their acclaimed 2020 record—which premiered at The Projector on 10 and 11 Dec 2021.

For those who love Explosions in the Sky and Mogwai

You have the patience to truly get into the music while your friends ask “so when do they start singing?”. You’re probably a musician yourself, suffering from a standard case of GAS (Gear Acquisition Syndrome).

Paint the Sky Red performing at Baybeats 2021 in the Annexe Studio.

Paint the Sky Red performing at Baybeats 2021 in the Annexe Studio.

When it’s overcast, Paint The Sky Red believes in taking control by adding their own splash of sunrise. Their ascending melodies evoke wonder, bringing with them a post-rock beacon of hope and promise. Record lovers rejoice—their 2019 EP, There Is A Tomorrow You Don’t Know, is now available on vinyl at Mosta Records.

Tranquil is testament to the persistence of creativity during a pandemic. Formed in 2019, the quartet has emerged with a language of math and post-rock that’ll get your feet tapping with their reverberating riffs and crisp beatwork. Their third and latest single, Panic & Confusion, emboldens us to power through the hard times.

For those who contemplate life and love

Oh, to be young and feel love’s keen sting. You’ve had your heart broken, maybe once or twice, and you’re definitely not getting over it any time soon.

Whisking together pop, punk and rock, singer-songwriter RENE brings a spunk that slices through the noise. Channelling clean and mellow vocals that magically blend with power chords and riffs, she offers something to ground us in a world of chaos. RENE recently released her debut EP Something To Hide, and has more to come.

Lively and disarmingly honest, Marian Carmel has a personality as infectious as her songs. The R&B and soul artist takes you through the dopamine highs and bittersweet lows of romantic love with her honeyed vocals. Her debut album, To You, To Me is an absolute treat.

Catch her alongside other local acts in Tonight with WOKFUNK: Class of 2022 at Come Together 2021.

A lyrical poet whose songs are laced with vulnerability and wistfulness, lewloh is Singapore’s folk pop wunderkind. He tells a unique story of being an LGBTQ+, Asian and third-culture kid—opening up new perspectives for his audience and yet remaining distinctly relatable. His freshest release is an acoustic cello rearrangement of his lead single terminal from his latest album michigan/missinghim.

aeriqah delivers gentle acoustic confessions with a stream of affective words. Subtle and pensive, they freely bare their soul in their sound, inviting others to reflect and do the same. Call Out, their debut single, presents a difficult reality check to someone who might not necessarily want to hear it. Catch them performing live on 26 Jan 2022 at All Things New.

Gifted with a unique brand of self-deprecating humor, Vivien Yap injects music with emotion, comedy, and idiosyncrasy all at once. Deviating from her folk-pop roots, her recent releases offer a hearty mix of lyrical sensibility and musical eclecticism you never knew you needed. Her latest EP My period is here, proves to be a bloody, genre-bending delight.

Catch her in Tonight with WOKFUNK: Class of 2022 as well.

Inez Yuen is a project assistant at Esplanade. She spends her free time busking, watching movies and reading essays on food culture. 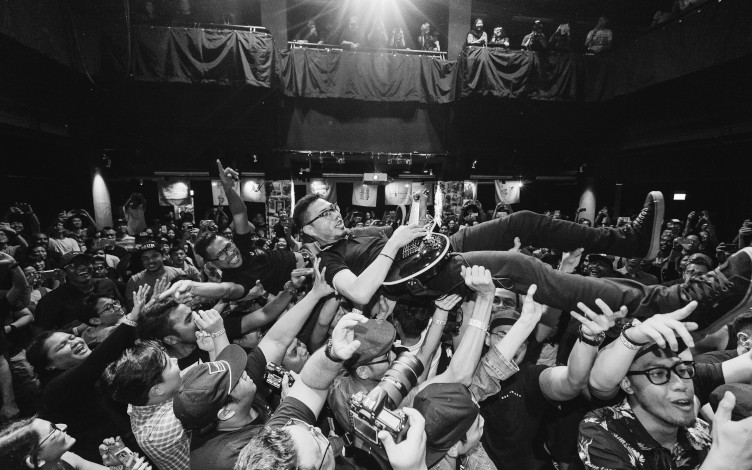