Which Raya song are you?

Six iconic songs for the season

From effervescent, toe-tapping numbers to the most stirring and haunting of ballads, Raya songs are as much a part of the festivities as the spirit of forgiveness and fellowship and groaning tables heaving with food. Simply put, it ain’t Hari Raya Aidilfitri, or Hari Raya Puasa, if you don’t hear one of these songs on the radio or TV. They typically make their appearance midway through the fasting month of Ramadan—a season of contemplation and repentance—and then almost certainly after the fasting month ends, amidst the swirl of house visits and feasting.

Through the decades, Raya songs have been written and sung by some of the region’s most iconic singers and composers. Here, we bring you six favourites with different vibes and personalities, alongside their matching shows for Pesta Raya 2021.

Its title says it all—“the light of Aidilfitri” in English, referring to a sign from God. This brooding slow rock number from one of the most popular Malay rock bands of the ’70s and ’80s hits all the emo notes of the season. Sung from the point of view of someone who has lost both his parents and cannot seek forgiveness from them on the morning of Hari Raya as is the custom, it looks to a higher a power for strength. A reminder never to take your loved ones for granted.

A poignant exploration of the idea of home and its importance to the self through the medium of dance, by the group Azpirasi.

One of those Raya standards from the ’70s along with Sharifah Aini’s Suasana Hari Raya, the powerful pipes of these singers can be heard ringing out from homes every other hour on the first day of the festivities. Written by renowned Singapore composers Zubir Said and Yusnor Ef, this up-tempo number, driven by Sanisah’s silky vocals, sketches the events of Day One of Hari Raya—morning prayers and asking one’s elders for forgiveness, the cemetery visit to pay respects to those who have passed on, and finally, the excitement of open house visits within the extended family.

Lovers of vintage dangdut, get ready to dance your evening away with Singapore’s dangdut princess Masnie and other rising stars of this popular Indonesian folk music style.

This one is for the child in every one of us. As a young boy in the 1960s, music arranger Indra Shahrir Ismail recorded this song about Hari Raya as seen through the eyes of a child. Written by his brother, the late composer Iskandar Ismail, it’s a song about seeking forgiveness from one’s elders, visiting friends of different races, wearing new clothes and shoes, enjoying great food—and of course, rejoicing that it’s a school holiday. A catchy number that has endured through the generations.

There are saga seeds in our pockets!

Adapted from a children’s picture book, this storytelling performance follows two kids, Mahir and Aqil, as they go on an excursion to the Malay Heritage Centre and discover more about Singapore’s past.

Traditional meets contemporary in a way that seems almost effortless, in this festive classic by the influential singer-songwriter M. Nasir. At the base of the song is the traditional Malay music genre of inang, mixed with pop elements and folksy guitar solos. Salam Dunia (“Greetings, world” in English) has a positive message—be brave and seek hope in the divine amidst the trials of life.

Electronic music meets the oud—a stringed instrument popular in Arabic music—in gambus electronica, a debut collaboration by Safuan Johari and Azrin Abdullah. Another performance taking a leaf out of the fusion playbook is Bloom (Mekar) by dance collective Ekta Singapura, which brings together silat and hip-hop.

The unconventional Raya song—a pulsating dikir barat number by the 1990s supergroup, made up entirely of percussion and call-and-response vocals. The lyrics capture the contemplative nature of the season—the end of Ramadan as the loss of a reflective period of feeling connected to God, as well as the possible loss of a loved one in the singers’ lives, making this Hari Raya particularly poignant.

These digital short films, created for Pesta Raya by some of Singapore and the region’s best known directors, are not your typical festival fare. From Indonesian film-maker Garin Nugroho’s Sarung, to the Anthology films by Faizal Faisal Ishak, Sanif Olek and M. Raihan Halim, they are inspired by unsung objects that loom large in the region and in the lives of artists. Contemplative and deeply personal, Warisan (Papassang Tu-riolo) by Riri Riza reflects on heritage and legacy in his short film.

Sung by a pair who were the Malay pop world’s equivalent of Sonny & Cher, this popular ’70s duet makes you feel like gamboling through an open field, without a care in the world. Hail Amir and Uji Rashid’s song about the joy of celebrating Hari Raya, embracing forgiveness and forgetting past mistakes makes one nostalgic for a more innocent and less complicated past.

Take a step back from life’s challenges, and find quiet joy in small blessings. Take comfort in the readings and performances of poets Sofia Nin and Aisyah Liyana and vocal artist NAMIE. For those whose idea of happiness is a party, come jam with the funk, disco and soul-infused Kribo Records.

Can't choose your favourite song? Take our personality quiz and find out!

Join us for a lively weekend of exciting performances with blockbuster concerts, new commissions and cultural showcases! 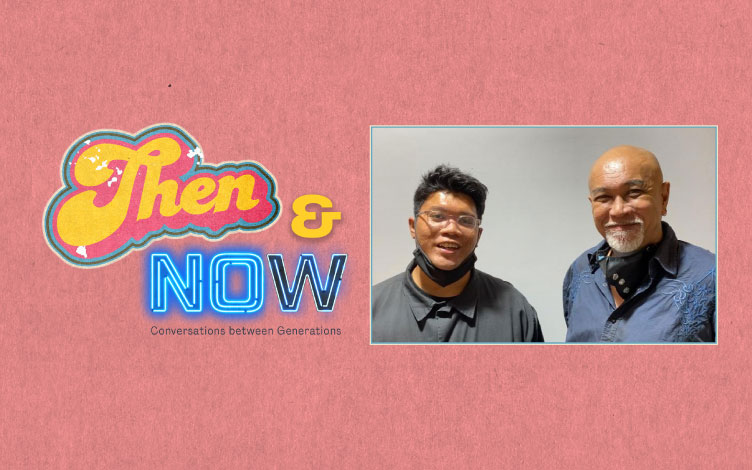