What happens when two technologies from different eras occupy the same space, and what potential does their interaction have for future generations? Connecting old aeroplanes with modern drones via workshops held within decommissioned aircraft in his native Ghana, Ibrahim Mahama explores how new technologies and imaginations can allow us to rethink life on all levels – beyond the human experience.

Love Campus takes on the promises of technology as a starting point through establishing relationships between old airplanes and modern drones. These relationships manifest themselves through a series of workshops within the cockpit and fuselage of airplanes transported across the country in Ghana to a rural settling for renewed social and ideological reconditioning. What happens when two technologies from different timelines occupy the same space? Is there a possibility of a singularity and what promises or potentials does it have for another generation? The birth of new imaginations promises another era of rethinking life on all levels beyond the human experience.

Ibrahim Mahama lives and works in Ghana. For MIF19 he created the major exhibition Parliament of Ghosts at the Whitworth. Known for creating monumental public realm art installations, he has presented work at international exhibitions such as Ghana's first national pavilion at the 58th Venice Biennale; the Norval Foundation, Cape Town; Documenta 14, Athens and Kassel; and All the World’s Futures, 56th Venice Biennale.

Mahama often examines how workers are affected by state or corporate policies and practices, and in many cases created his own temporary workforce in the making of his art. His expansive practice includes creating education and cultural infrastructures, such as the Savannah Centre for Contemporary Art (SCCA) in Tamale, an institution conceived as a studio space and exhibition venue. In April 2021, Mahama opens his third venue, Nkrumah Voli, to the public. Located in central Tamale, the silo will function as an exhibition space and repository for ecological forms and archaeological artefacts from the region.

For this project, he is creating a film about the activation of Parliament of Ghosts and the additional education spaces he is building in Tamale.

New films from artists under lockdown

The global COVID-19 pandemic is changing our world in countless ways: some already visible, others as yet unknown. It has shattered much of what we knew and understood about our lives. But could this tragedy also be an opportunity – a moment for us to reimagine, reshape and rebuild society to be fairer, brighter, better?

Postcards from Now presents five distinct perspectives from leading international artists of every stripe – choreographers, musicians, visual artists, theatre-makers, animators and more. Commissioned and created at the height of the global lockdown, these five films explore everything from community to communication, patriarchy to power. And in very different ways, they consider the question that we’ve all been asking ourselves and others: what happens next? 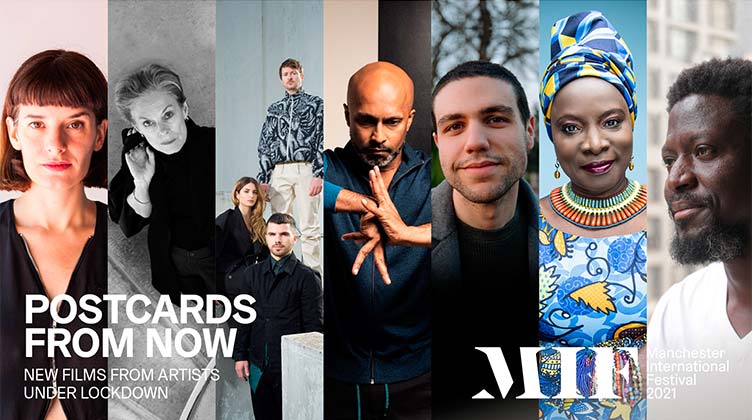 These and other world-renowned artists from different art forms and backgrounds create dynamic, innovative and forward-thinking new work, staged in venues across Greater Manchester – from theatres, galleries and concert halls to railway depots, churches and car parks. MIF works closely with venues, festivals and other cultural organisations globally, whose financial and creative input helps to make many of these projects possible and ensures that work made at MIF goes on to be seen around the world.

MIF supports a year-round Creative Engagement programme, bringing opportunities for people from all backgrounds, ages and from all corners of the city to get involved during the Festival and year-round, as volunteers, as participants in shows, through skills development and a host of creative activities, such as Festival in My House.

MIF will also run The Factory, the new landmark cultural space currently being built in the heart of Manchester and designed by the internationally-renowned architect Ellen van Loon of Rem Koolhaas’ OMA. The Factory will commission, present and produce one of Europe’s most ambitious and adventurous year-round creative programmes, featuring bold new work from the world’s greatest artists and offering a space to create, invent and play.

Attracting up to 850,000 visitors annually, The Factory will add up to £1.1 billion to the economy over a decade and create up to 1,500 direct and indirect jobs. Its pioneering programme of skills, training and engagement will benefit local people and the next generation of creative talent from across the city, whilst apprenticeships and trainee schemes are already underway during the construction phase.

Postcards from Now by Manchester International Festival (MIF) presents five distinct perspectives from leading international artists. Commissioned and created at the height of the global lockdown, these five films explore everything from community to communication, patriarchy to power. And in very different ways, they consider the question that we’ve all been asking ourselves and others: what happens next?